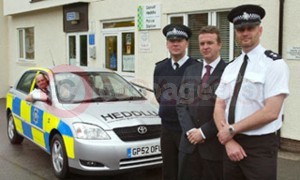 Local connections have helped bring the first Toyota Corolla onto the North Wales Police fleet – and the force is keen that the car should have as high a profile as possible during its 12-month appraisal period.

Toyota has built engines at Deeside in Flintshire for more than 10 years, and it is in that industrial area, in which more than 700 people are employed at the Toyota plant, that the latest police recruit will carry out its duties as a community beat vehicle.

"We're constantly reviewing the fleet, and as part of our commitment to strengthen the community policing team in the area, we thought we should try a vehicle to which our community would relate," said Chief Inspector Bob Wilson, based in Wrexham with responsibility for Eastern Division Operations.

"The new Corolla has been heavily promoted and we thought it would be interesting to see if it was up to the job," he said. The North Wales Police fleet of around 250 vehicles at present consists mainly of Ford vehicles.

The Corolla 2.0-litre D-4D diesel hatchback was provided through Toyota Fleet and has been badged and fitted out with blues and twos. It will be expected to cover at least 40,000 miles on the streets during its trial year, though cars operating in the rural areas can cover as many as 70,000 miles a year. The force's cars operate on a three-year cycle.

The Corolla will have to satisfy three main requirements to prove its worth to North Wales Police. "We look first for reliability, and then image – it has to look professional," said CI Wilson. "This is a high-visibility vehicle and we want people to notice it. It also has to provide sufficient room for officers to carry out their everyday duties efficiently."

Toyota is already represented on a number of police forces, including Derbyshire, Hampshire, Norfolk, North Yorkshire, Strathclyde and West Mercia. Toyota Fleet's Bluelight Blueprint initiative is designed to tailor vehicles for the specific needs of the police and other emergency services, ensuring that vehicles meet strict Home Office guidelines within a highly competitive pricing structure and best-in-class cost of ownership on featured models.

Toyota’s Bluelight vehicles will be on display at the National Association of Police Fleet Managers’ Conference at the Science Museum in Wroughton near Swindon from 19-20 August.