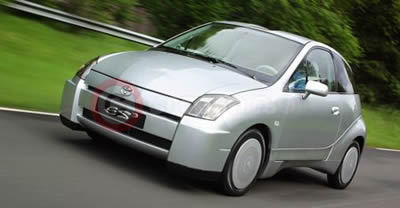 Conventional plastics may have had their chips as Toyota pioneers the development of biodegradable materials for car construction derived from plant sources. Since 2001, Toyota Motor Corporation has been pioneering bioplastics derived from sweet potato crops grown in Indonesia.

From small-scale beginnings, the project has already developed to the stage where a new product, Toyota Eco Plastic, is being used in the manufacture of floor mats for the Toyota Raum which is on sale in Japan and follows more extensive use of the material in Toyota’s ES3 concept car.

The sweet potato project is an important element in Toyota’s wider biotechnology and afforestation business, established in 1998. Two years earlier Toyota chairman (now president) Hiroshi Okuda identified water and food supply as key areas for future technology research, anticipating that these issues would have a critical global impact in the decades ahead.

Research was launched into the potential of the sweet potato and the way it could be used for creating biodegradable plastics, feeding livestock and producing hydrogen for fuel cell and electric vehicles.

PT Toyota Bio Indonesia was set up in April 2001 farming sweet potato crops for use both as animal feed and for the manufacture of bioplastics. At present the global bioplastics market is just 20,000 tonnes annually, but Toyota calculates that as much as 30 million tonnes of the total annual plastics demand of 150 million tonnes could be replaced by bioplastics. In view of that potential, Toyota aims to increase production to 20 million tonnes with a potential sales value of five trillion Yen.

Toyota’s research and development is aided by the fact that it is also an end-user of the product, so can ensure the required quality right from the start. In environmental terms, the bioplastics are not only biodegradable, but are also carbon neutral, in that the sweet potato plants absorb carbon dioxide while growing.

So far, Toyota has focused on using the material for its own automotive products, but they could prove particularly well-suited to applications such as plastic sheeting for crop propagation and for domestic refuse bags.

The production process involves the extraction of starch from the sweet potato plant and breaking it down with enzymes to create a sugar. This is fermented into lactic acid and then polymerised, refined and moulded to create the raw bioplastic material. The cost of the process is only marginally greater than for conventional petroleum-based plastics.

As well as its sweet potato operation, Toyota has also established businesses that are planting new forests in Australia, promoting roof gardens in Japan’s urban centres, excavating peat in China and exploring the potential of a high-yield strain of rice in Vietnam.