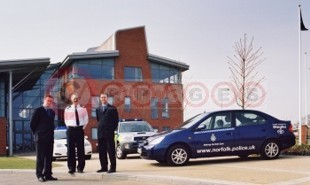 A hybrid vehicle has joined Norfolk Constabulary but it doesn't have a quiet undercover role – its job is to be noticed on the streets as much as possible. In addition, Norfolk Constabulary is currently evaluating the whole Toyota Blue Light fleet including a RAV4, Corolla, Land Cruiser and Avensis.

The environmentally friendly Toyota Prius, which is being evaluated by the police over a six-month period, is signwritten with the address of the force's new website. The idea is to encourage people to log on, find out what's happening locally and ultimately provide feedback to the force.

Norfolk Constabulary, which is based in Wymondham, was one of the first UK forces to have a community website, but it wants its redesigned version to have a far higher profile.

"We have a target of 200,000 visits and a million pages visited, and it will be one measure of the Prius's success as a high-visibility vehicle if we achieve that," said Marketing & Communications Manager Peter Steward. The Prius will be used as a pool car mainly by staff from his department, and as such will attend major incidents in the region. It was handed over to Norfolk's new Chief Constable Andy Hayman at the start of January.

A 1.5-litre VVT-i petrol engine drives the Toyota Prius, but a 30kW electric motor takes over at low speeds. This allows it to return more than 60mpg around town, and with the lowest CO2 emissions around at only 114g/km, it already meets European emission standards, which come into force in 2005.

"Norfolk Constabulary is developing a Green Policy for police vehicles that will consider the benefits of using alternative fuels," said Fleet Manager Mark Davy. The first mass-produced petrol-electric hybrid, the Toyota Prius has a 90% share of the world hybrid market, with 100,000 cars sold in the past five years.