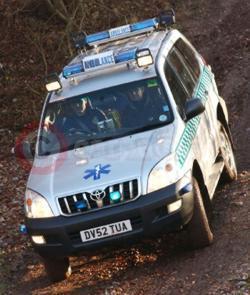 A volunteer Community First Responder team which provides emergency cover for walkers and other users of the remote Staffordshire moorlands is making good use of a new Toyota Land Cruiser LC2 – now that an intensive off-road course has allowed drivers to improvetheir ability to rescue people trapped in difficult access areas.

The volunteers who make up Wetton & Alstonefield Community First Responders recently won a Queen's Golden Jubilee Award for their work. Only the second self-funding team of its kind in the UK, its 25 members stand by round the clock ready to respond to any type of medical emergency.

In a month they can receive as many as 20 calls, so the volunteers need to be able to drive in rugged terrain inaccessible to regular ambulances, and often snowbound in winter.

Their previous vehicle was an elderly Jeep Cherokee and, because most of the responders were untrained in off-road driving, they often had to leave it on the nearest road and proceed on foot, losing valuable time and carrying capacity.

"We're delighted with the Land Cruiser," said the team's co-ordinator John Clarke. "It fulfils our requirements exactly and everybody likes driving it because it's so easy." The team had considered all the appropriate 4x4s on the market. "One of us already had a Colorado and had been impressed by it, and we all knew Toyota's reputation for reliability."

The 3.0 litre diesel automatic was bought outright with the help of one of the first grants for a vehicle to be agreed by the Countryside Agency, the government-funded body set up to improve the quality of rural life. The grant followed a partnership agreement from eight Staffordshire parish councils.

Stoke-on-Trent Centre Pinkstone Toyota supplied the Land Cruiser at cost, and the £25,000 grant, plus another £10,000 raised among the community, allowed the paramedics to have it fitted out to their own design, including satellite navigation, ‘blues & twos’, an extended spinal-board stretcher, and racking for a wide range of resuscitation and other medical equipment. "It's a professional vehicle!" said John Clarke.

Sponsor Pinkstones will service and maintain the Land Cruiser free for the next three years. And to cover the training issues, Toyota Fleet and Pinkstones set up a comprehensive two-day training course for the responders at local quarry Trentham Gardens. Twenty members of the response unit, as well as some Staffordshire Ambulance staff, received instruction from Toyota's 4x4 trainers Powertrain.

Two Toyota Land Cruisers, an Amazon, two Hilux’s and a RAV4 were made available for the event. The responders honed their skills driving the vehicles in conditions even more challenging than those on the moorlands, including a daunting 60ft vertical ‘death slide’.

"We were very impressed with the training course, which was well organised and highly successful," said John Clarke. "All the vehicles performed extremely well, everybody was able to do it and we all came away buzzing. The event also turned out to be a valuable team-building exercise."

"Everyone was so enthusiastic once they realised just what these vehicles could do, and what they themselves were capable of as drivers," said Pinkstone Toyota's Business Centre Manager Martyn Davies. "Before the course, four-wheel drive capability had meant getting their vehicle onto a grass verge! The team needed a real 4x4 and now they have one – and the individual ability to get the best out of it."