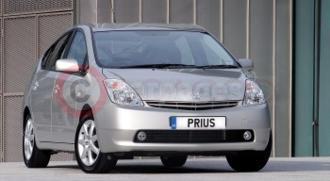 The sales performance of the new Toyota Prius has got off to an exceptional start in the UK, with motorists quick to respond to its unparalleled combination of clean performance, fuel efficiency, style and practicality. Since order books opened, more than 700 new Prius have been snapped up.

This figure is well ahead of the 149 previous generation Prius sold last year and is already within a few units of the 2003 sales total of the Honda Civic IMA, currently the only other hybrid power car available in Britain. Prius is already well on its way to achieve its 1,600 UK sales target in its first year.

The UK experience follows the new Prius’s phenomenal success in other markets. Advance orders in North America and Japan were around 27,500 and first month sales in Japan were six times the target figure. Demand in the USA has been so strong, Toyota increased production at its Tsutsumi factory by 31 per cent in December.

The rapid success of new Prius reflects the quantum leap the car has achieved in both performance and design. The Toyota Hybrid Synergy Drive system which powers the car delivers exceptional fuel economy and low emissions through its combination of a conventional 1.5-litre petrol engine with a compact but highly efficient and powerful electric motor. Fuel consumption of 65.7mpg is attainable in combined cycle driving, while in urban driving the figure is 56.5mpg, better than even the most frugal compact diesel cars. In terms of emissions levels, the Prius is the world’s cleanest car on public sale, with nitrogen oxides and hydrocarbons levels substantially below Euro 4 standards. These benefits are not at the cost of performance: the Prius can move from nought to 62mph in less than 11 seconds and has an impressive 400Nm of torque on tap from nought to 1,200rpm.

Although the new Prius makes extensive use of advanced technologies in its engine, transmission and braking systems, it is as simple – if not simpler – to drive than a standard car. It is also a regular medium-size family hatchback that is not compromised in terms of passenger or luggage space and which is handsomely styled, inside and out.

Toyota GB PLC Commercial Director Paul Philpott said: "The astonishing response new Prius has received from both the British media and motorists marks a watershed in people’s perception of alternative power systems. They have recognised the substantial advances Toyota has made in clean performance and efficiency, without sacrificing the qualities of ease of use, style and comfort demanded by today’s drivers.

"I am confident that the early sales momentum generated by Prius will continue. Our only problem now may be sourcing enough vehicles to meet the demand!"