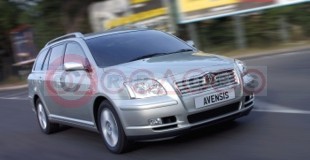 By tradition the car in front is a Toyota, but now that message is being broadcast more widely thanks to a breakthrough in vehicle-to-vehicle radio transmissions.

Adaptive Phase Radio Interface (APRI) uses an integrated car radio transmitter which broadcasts any number of pre-set messages. Using a dedicated ultra-low frequency system, it overrides any other radio transmissions within a five-metre radius, effectively allowing a Toyota vehicle to take control of the local airwaves. APRI builds on technology first unveiled in the Toyota POD concept car, presented at the Tokyo Motor Show in 2001.

Already a number of new Avensis models have been equipped with APRI and transmit advertising bulletins about the special qualities of the car and details of a customer hotline for sales enquiries. The messages are picked up by any other vehicle coming within five metres of the car, with its audio system switched on. A wavelength sensor prevents any interference with frequencies used by the emergency services.

Owners who select the APRI option for their new Toyota can have their own personal messages downloaded into the system. These can then be selected according to preference, just as you would choose your favourite CD. The system will be available to the public from early 2004 and safety messages are expected to be the most popular with commands such as ‘keep your distance’, ‘dip your lights’ or ‘I need to pass, please move over’.

"The possibilities are limitless," said Toyota R&D spokesman Joki Shonyu, "drivers can even sell on their ‘air time’ to third parties to broadcast adverts and announcements for businesses and organisations."