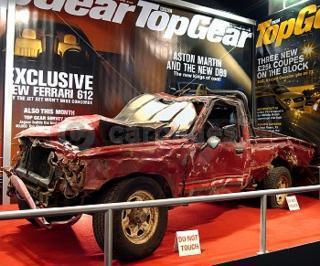 The nations favourite battered pick up, a red Toyota Hilux made famous by BBC’s Top Gear, makes an appearance at The Sunday Times Motor Show Live. The pick up, which looks an absolute wreck apparently still starts but won’t be moving from its static display at the show.

The heroic vehicle, which has been chained to the seabed and immersed by the tide and placed on top of a tower block that was demolished with explosives, astounded Jeremy Clarkson and Top Gear audiences when it simply refused to die.

The pick up can seen in all its wrecked glory at the Top Gear stand through out the show.