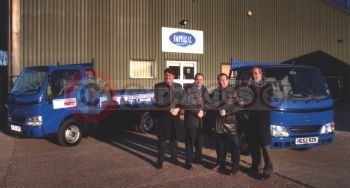 Jefferson Calor, principal dealer for Calorgas and associated products throughout Sussex and Surrey, has taken on eight Toyota Dynas for deliveries – and the manoeuvrability of the dropside-bodied chassis-cabs was a key factor in its decision.

Meanwhile its sister company Imperial Barbecues has provided three Toyota Hilux Double Cab 4x4 pickups for its field salesforce. Imperial is a wholesaler of a range of gas and charcoal barbecues, accessories and patio heaters.

"The Dynas are a similar type of truck and we needed another vehicle that could negotiate narrow lanes like those in and around Brighton," said Phil Gleed, General Manager of Jefferson Holdings. The Dyna has power-assisted steering and a tight turning radius of 4.5m.

"We tried out various models but the Toyota was the nearest we could get to what we needed. We liked the diesel engine and the Dyna is known as a reliable truck. The price and customer service angle clinched it for us."

The three Imperial Barbecue-logoed Hilux pickups, already in service, have been hired on two-year/30,000-mile contracts. They are based at Jefferson Holdings' head office at Denmead in Hampshire.

"The double cab provides a tax break for the salesmen, and as it is a commercial vehicle they can carry plenty of stock around in the back," said Phil Gleed. The pickup is powered by the same diesel engine as the Dyna and provides a payload of up to 1065kg.