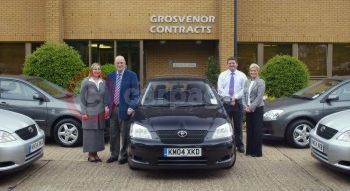 Nine Toyota Corollas have been added to the fleet of leading noise-control specialists, the Hodgson & Hodgson Group. The company started switching its sales fleet of 40 cars to Toyota Avensis D-4Ds at the end of last year, and the Corollas, also diesel, are additional vehicles ordered for its acoustic consultants, who had not previously driven company cars.

Long-established Hodgson & Hodgson is the UK's market leader in acoustic and thermal insulation solutions. Based at Northwich in Cheshire, it operates from a further seven sites around the UK. "Our products are used to control noise and heat output on anything from computers to battleships," says Roy Aldred, the group's chief buyer, responsible for the company's car fleet. The company's products are also widely supplied to several specialist car manufacturers.

The company started replacing its sales fleet of Peugeot 406s with Toyotas last year following a wide-ranging review, but the latest batch of Corollas is the biggest individual order so far. All vehicles are supplied under a contract hire agreement with Grosvenor Vehicle Contracts, the UK's largest privately owned leasing and fleet management company, on a three-year replacement cycle.

Hodgson & Hodgson's main considerations in switching to Toyota were safety and the environment, the support package available and British build. "We have a very good safety record, but with the reps covering up to 40,000 miles a year, we wanted to be sure that they felt safe and secure," said Mr Aldred. "The Toyotas were the best cars we looked at in terms of crash protection and general safety levels.

"We also wanted reasonably sized cars, again so that the drivers would be comfortable on long journeys. Euro IV compliance was also very important and Toyota was the first to meet those standards. Our commercial director, who normally drives a Mercedes 3.2 litre diesel, test drove the Avensis T3 D-4D and was very impressed with how well it compared.

"The timing of our review was right, too, as Toyota was in the process of changing the image of the Avensis and the Corolla, and people liked the new look."

Avensis T2’s are being provided for sales representatives, with T3-S or T3-X’s for sales managers and T Spirits for the two business leaders, though they have preferred the practicality of T3 estates. Corollas are available for the acoustics consultants, who do a lower mileage than the sales staff, and for anyone who wishes to transfer from an Avensis.

"The first batch of Avensis arrived last November and we have had no problems at all," says Mr Aldred. "Everybody has been very happy with the cars, and one comment has been that people like the higher seating position - it makes them feel safer. If the drivers are happy, I'm happy - my job in managing the fleet is a whole lot easier and I can spend more time saving the company money."