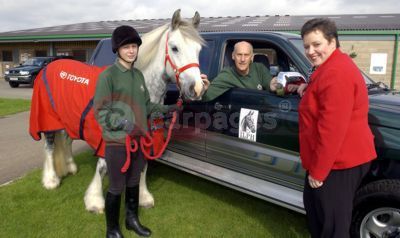 A drive for greater value for money has led the world's leading equine welfare charity to switch much of its vehicle fleet to Toyota. Eight Avensis T3S diesel estate cars and two Hilux 250 GX and an EX Double Cab were delivered to the International League for the Protection of Horses (ILPH) at the end of September, with three more Hilux GXs on order. The charity operates 25 vehicles, and until now has provided a different make of all-wheel drive car for its operational staff.

The new vehicles are being supplied by Kings Toyota in Southampton, part of the Hampshire-based Snows Motor Group. Most of them are on contract hire, although some are purchased outright. "Effectively our Field Officers and Farm Managers were given freedom of choice of vehicles," said the League's Administration Manager Alan Bunn. "They did a lot of testing and as a result almost all of them are going for Toyota, in two or four-wheel drive depending on the sort of work they have to do.

"The drivers were attracted by the comfort of the vehicles and the level of equipment for the price, and we were offered a very good value deal by Toyota. As a charity we're always looking at driving running costs as low as we can, so one of the most important factors for us was Toyota's history of reliability. Another key factor was we wanted to move from petrol to diesel power, and Toyota was able to provide what we needed in both two and four-wheel drive."

The Norwich-based ILPH has been running since 1927, responding to reports from the public or called in by the police or RSPCA to investigate allegations of cruelty to horses. It employs 16 full-time Field Officers in the UK, as well as Farm Managers for its four animal rehabilitation centres. The Field Officers, mostly former mounted policemen, investigate more than 1,000 reports of abuse each year, as well as inspecting markets and checking on the 2,000 rescued horses owned by the ILPH but on loan to private homes.

Working from their homes throughout Britain, the officers cover between 16,000 and 36,000 miles a year in the course of their work, so vehicle replacement cycles will be split between three and four years. The higher mileages are recorded in more remote parts of the country such as the Scottish Highlands, where a robust 4x4 facility may be required.

"Some of the drivers work in really rough terrain," said Angela Ganner, Corporate Business Manager for Kings Toyota, who has bridged the distance between Southampton and Norwich to handle the orders. "We've had feedback already from one of the drivers who lives on an extremely steep bank, about 1 in 4, and he's pleased because he has no difficulty negotiating it with the Hilux."

Angela continued: "The ILPH's CO2 ratings were previously high, so where possible it wanted to move to more tax-efficient cars such as the Avensis diesel, which is Euro IV-compliant. As a charity it has to be extremely cost-conscious, and using Toyota vehicles should ensure that it gets good value for money."