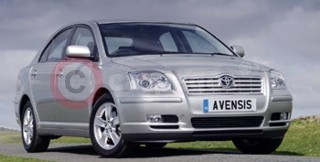 Judges highlighted the distinctive styling and excellent build as features that will attract fleet drivers to the new Toyota Avensis, while its low whole-life costs and strong residual values will ensure it of a place on more and more choice lists. Fleet World editor Ross Durkin said: ‘This is the third "built-for-Europe" model to come from Toyota’s design centre in France and it is the best yet. It looks good and drives well and completes a very strong line up for Toyota in fleet.’

Former IBM Fleet Manager George Emmerson, a member of the judging panel, commented: ‘Toyota have got it right with Toyota Avensis. Fleet Operators cannot fail to be impressed with its financial credentials, while drivers will be keen to get their hands on its Euro IV-compliant diesel engines. Its recent achievement of five stars in the Euro NCAP crash test programme means full marks all round.’

Winning the accolade of Best Fleet Model Range is a recognition of just how far Toyota has come in the last 10 years. New models like the Yaris, Corolla and Avensis are designed in Europe for Europe and they provide for Toyota an excellent platform for success.

Fleet World editor Ross Durkin said: ‘It is hard to see a chink in Toyota’s armour at present. Excellent VVT-i petrol engines are offered alongside common rail diesels and those in the new Avensis are Euro IV-compliant, offering drivers a significant tax saving. The petrol/electric hybrid Prius represents the company’s thrust towards achieving lower emissions.’

Former IBM Fleet Manager George Emmerson commented: ‘Toyota now offers something for everyone in a way that other manufacturers struggle to compete with. They are a solid cost proposition and offer high levels of specification across the range.’

Gibb Grace, Editor, Commercial Fleet World, commented, 'Advances in refinement and fuel economy stem from an all-new 2.5-litre D-4D engine to suit 4x2 and 4x4 models respectively. Hilux now has an admirable combination of rugged durability and cost efficiency that appeals to both the private and commercial vehicle market sectors.'

Jon Pollock, General Manager for Toyota Fleet commented: 'We are delighted to win these awards at such a significant time for Toyota Fleet. Adding this to the encouraging feedback from 250 of the UK’s top Fleet Managers and the successful launch of our Toyota Business Centre Network in January, we are looking forward to a great year.'