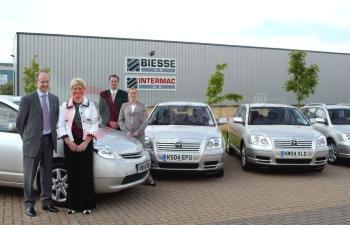 Reliability, safety and economy has made Toyota the brand of choice for one of Britain's leading woodworking machinery suppliers. Biesse Group UK of Daventry is standardising its previously mixed 20-vehicle fleet by replacing the cars with Toyota Avensis diesels - and it has selected the ultra-economic Priuses for its senior executives.

Biesse UK is part of an international group that produces machinery and systems for processing glass and stone as well as wood, and is one of the top three sellers of woodworking machines in the world. The Daventry-based subsidiary imports woodworking machines from Italy for distribution throughout the UK, and its sales representatives and technicians average more than 40,000 miles a year. For that reason Biesse UK was particularly concerned about such issues as reliability, safety and economy for its drivers.

"We had a collection of Rovers, Fords and Vauxhalls before and wanted everybody to have the same make of car," says Biesse UK's Managing Director Max Manina. "Toyota has a very good name - Toyotas are extremely reliable and we chose the cars mainly because they are very sturdy and safe. They are also fully accessorised and have a nice design."

The drivers were fully involved in the decision to switch to Toyota. "We had an Avensis here for test and they loved it," says Mr Manina. The first nine Avensis T2s were delivered at the start of June, with two Avensis D-4D Tourers for Biesse UK's Key Account Manager and Product Manager. The vehicles are being supplied through Grosvenor Contracts on a three-year/130,000-mile replacement cycle.

And, after also considering top of the range Avensis models, Max Manina and his Finance Manager Trevor Bullen decided to order Toyota's successful petrol-electric hybrid, the Prius for their own use, with Mr Manina selecting the top of the range model. "I do like all the electronics on the car - they're quite incredible. I just felt like driving something different, and the Prius does drive extremely well."

Economy was also a major consideration in ordering the Prius and Avensis models. "All the vehicles are Euro IV-compliant, so everybody gets to pay a bit less. As Finance Director Trevor is very careful about cost-effectiveness!"

Finally, Max Manina had praise for Toyota Fleet. "They're fantastic people and have been extremely helpful. We're a company that sells, so we know if other sales people are good or not!"