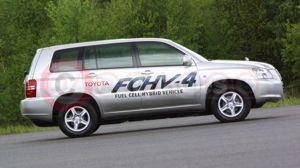 Limited Numbers To Be Offered In Japan & U.S. From The End Of This Year

Toyota announced today plans to start limited marketing of a fuel cell hybrid passenger vehicle model in Japan and the United States from around the end of this year, earlier than originally planned.

The earlier launch reflects the successful outcome of a full year of Japan/U.S. public-road testing of the FCHV-4 – a fuel cell hybrid vehicle (FCHV) prototype – and Toyota's response to public expectations for cleaner mobility solutions.

The coming model will be a newly developed FCHV featuring conventional vehicle-like performance based on improvements to the FCHV-4's reliability, cruising distance and functionality. Lowering costs, improving performance at freezing-and-below temperatures and other issues remain, however, meaning that units of the vehicle, to be available by lease, will only be offered to such entities as government bodies, research institutions and energy-related companies.

Although terms have yet to be determined, Toyota plans to lease about 20 units over the course of a year in limited areas in which the company has confirmed the availability of hydrogen supply and after-sales service.

Toyota began testing the FCHV-4 on public roads in Japan in June 2001 and the U.S. in July of the same year. Units of the FCHV-4 have covered a cumulative 110,000 kilometres on and off the test track, providing valuable insight toward the commercialisation of FCHVs. Toyota plans to continue the tests.