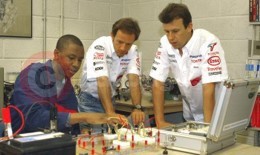 Chris Hughes Communications Co-ordinator for Panasonic Toyota Racing commented: "The prison visit at Aylesbury was fascinating. Olivier and Cristiano were very impressed with the work Toyota is doing to provide useful job skills to reduce levels of re-offending. It was a break from the usual routine for the drivers and a chance to experience a completely different side to Toyota!"

Olivier and Cristiano learnt from the prison inmates that there is much more to the course than providing a recognised technical qualification. Gary Harlock, Toyota GB’s Regional Training Manager explains: "Toyota’s training scheme at Aylesbury gives these young men the self-confidence, interpersonal skills and motivation to secure employment on leaving prison and forge a new life for themselves."

Andy Woodley, Toyota Technical Education Programme Centre Manager for Aylesbury added: "Through the commitment Toyota has shown over the past five years, we have a programme that gives ex-young offenders a realistic opportunity of finding employment and changing their lives."

The course run at Aylesbury mirrors Toyota’s own national training centre course and runs for 18 months. By February 2003, 70 inmates had completed their training. As well as addressing the employment problems faced by prisoners, the Toyota scheme also helps tackle the issue of a national shortage of qualified technicians.

The success rate has been high among those who have completed their sentences and found employment on their release. Three have gone on to fulfil positions as technicians in Toyota dealerships, while nine more have also found good jobs with other motoring and engineering related businesses.

Olivier Panis and Cristiano Da Matta also took time out of their hectic schedule, leading up to the British Grand Prix at Silverstone this Sunday, to meet 450 Toyota staff at Toyota GB’s head office in Epsom yesterday and 4,000 Toyota members at Toyota Manufacturing UK in Burnaston, Derbyshire today.