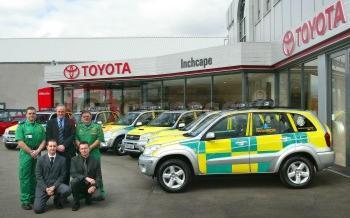 Six Toyota RAV4s have joined East Midlands Ambulance Service, following a successful year-long trial. The 4x4s will be among 40 Fast Response Vehicles (FRVs) in the service's 490-strong fleet, operated by paramedics and carrying a full range of emergency equipment.

"The vehicles will be deployed across the East Midlands area and used off-road in the Peak District, Sherwood Forest, at sports grounds and so on," said EMAS's Fleet Manager Andrew Potter.

Replacing Renault Scenics and Ford Mondeos, this is the first time that Toyota has been represented in the mixed EMAS fleet. "A long-term demonstrator RAV4 was operated and subsequently acquired by the NHS Trust in 2003," said Mr Potter. "The main essentials required were reliability, acceptable performance, load-carrying ability, good working environment and fuel economy. The RAV4 met all these criteria during the demo period."

The vehicles were purchased from Inchcape Nottingham and converted for their role by Woodway Engineering of Coventry. They are expected to operate for five years before replacement.

"Though these vehicles were not purchased under Toyota Fleet's Bluelight Blueprint programme, we understand that future business will be by that route," said Andrew Potter.

Bluelight Blueprint is a scheme designed to develop bespoke marked cars for the emergency services. Its aim is to ensure that official requirements for reliability, performance and safety can be met at the lowest possible outlay. Toyota Fleet has highlighted the frontline potential of the RAV4, as well as its Land Cruiser and mid-range Avensis vehicles, as part of the programme.

"The RAV4 has shown its merits in terms of reliability, performance and cost-effectiveness on trial with East Midlands Ambulance Service," said Toyota Fleet's General Manager Jon Pollock. "We're pleased that this has led to an order for six frontline vehicles, and are confident that the RAV4s will prove reliable workhorses in this important role."