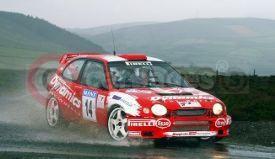 Toyota has not one, but two F1 cars on its motor show stand at the NEC – and you can "drive" one of them as it is a full size simulator – but the focus for motor sport day on Friday, 1 November will be on rallying and Local Heroes.

2002 British Rally Champion, Jonny Milner and his Corolla WRC will be on the Toyota stand in Hall 1 alongside the world’s only hybrid rally car, the Toyota Prius which competed in the 5,000 mile Midnight Sun to Red Sea Rally. Driver and co-driver, Nik Berg and Tim Bampton, will also be on the stand.

Yorkshireman Jonny Milner with Welsh co-driver Nicky Beech won the 2002 Pirelli British Rally Championship in a privateer Corolla WRC. Milner never finished off the podium in the seven event series and took three outright wins to claim the title. The Corolla won Toyota the World Rally Championship in 1999, but showed the depth of its ability by taking genuine privateer Milner to the title three years later.

Jonny Milner is one of the most gifted rally drivers in the UK and one of the most popular with the media and fans. His new title joins a list that includes British Junior Rally Champion, Shell Rally Scholarship winner and British Rallycross Champion.

Jonny starred as one of the fastest competitors in the 2000 British Rally Championship, despite driving "only" a showroom class, Group N, Toyota Celica, against superior machinery. With the 2001 series cancelled due to concerns regarding the Foot and Mouth outbreak in the UK, 2002 saw Jonny return to action in a Toyota Corolla World Rally Car (WRC). The step up finally offered Jonny the chance to show his undoubted ability at the top level.

Beech first teamed up with Jonny in 1998. Since then the pair have become a formidable team and have been regular front runners in the British Rally Championship ever since.

It might only have finished the gruelling 5,000 mile, three-week Midnight Sun to Red Sea Rally in 15th place, but the result secures the Toyota Prius’ place in motoring and motor sport history as the first hybrid car to enter and finish an official, FIA sanctioned event.

The route from Northern Sweden to Jordan – via the Czech Republic, Slovakia, Hungary, Bulgaria, Romania, Turkey and into the Lawrence of Arabia deserts of Syria – brought many dramas for the pioneering crew of Brits, Nik Berg (32) and Tim Bampton (33). They suffered a front suspension smashing crash in the Czech Republic, dodgy fuel in Turkey, not to mention weather and terrain as varied as 37 degree heat in the desert to lashing rain and rough rocky roads in Romania.

The drama continued right to the end when they got a puncture with several miles to go, but they pressed on regardless to complete the last of the 40 special stages that totalled more than 450 miles (720km) on tarmac, gravel and desert.

The Prius is the first of a new breed of car, one that uses less petrol and produces much lower emissions, especially around town. Hybrid – denoting a combination of two power sources – will become more and more common as Toyota and others work to provide a sustainable alternative to the fossil fuel burning engine. Toyota is the leader in hybrid technology and recently celebrated the sale of its 100,000th hybrid vehicle worldwide.

Prius and the technology within it have won Toyota many awards around the world, but competition was never part of the plan for this most eco-friendly of family cars. Even with two motors it wasn’t the fastest car in the rally, but the aim from the beginning was to prove the car’s reliability and reach the finish in Jordan.

"This is a world first for this type of vehicle and the conditions were the toughest test yet of this new technology. Just to finish is a victory in itself. We drove the car hard over some of the roughest roads in Europe and it has performed superbly," explained Nik.

Driver Nik Berg is a freelance journalist and editorial consultant specialising in motoring and technology. Nik is a former Deputy Editor of BBC Top Gear Magazine and former Editor of BBC Tomorrow's World Magazine. Navigator Tim Bampton is a marketing and PR consultant. Tim has a wealth of experience in motor sport, most recently in Formula One with Williams and Honda.