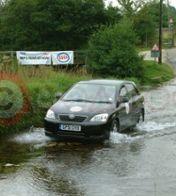 The Toyota Corolla T Spirit 2.0-litre diesel five-door has won its class in the RAC/Fleet World mpg Marathon 2002 – by achieving over 66mpg over a 465-mile, two-day route across varied conditions from motorways to narrow lanes to a mountain pass in Snowdonia. And a Toyota Hiace 2.5 D-4D van covering the same route recorded an impressive 43.04mpg.

The Corolla was driven by Doug Powell, fleet manager of Ventiv Health and navigated by Trevor Holland, beating off stiff competition from other diesels – the new Vauxhall Vectra, Peugeot 406 Coupe and the new Mazda6 – to emerge outright winner of its class with a percentage improvement score of 36 per cent.

"We achieved even more than anticipated and won both categories which is terrific," said Doug. "The course was more realistic this year as stretches of motorway and dual carriageway were included. The Corolla was superb – the performance and handling are excellent, ensuring we won our class fairly comfortably – we could have gone on even further!"

Commenting on the purpose of the event Ross Durkin of Fleet World said: "We launched the mpg Marathon two years ago as a way of demonstrating to fleet operators that careful driving could dramatically reduce their fuel bills. Many of the cars taking part in the event are so advanced that they are already very economical. The addition of good drivers pushes the fuel consumption figures to a level that no serious finance director can ignore."

Jon Pollock, General Manager for Toyota Fleet added: "The marathon shows how fuel can be saved with careful, skilled driving in varied conditions. The impressive 66mpg achieved by the Corolla D-4D further proves the appeal to fleet customers in choosing the new Corolla diesel for its efficiency and cost-saving potential."

Fuel consumption is an important consideration for any commercial vehicle fleet operator, but reliable figures can sometimes be hard to find. That's why Toyota's performance in the RAC/Fleet World mpg Marathon is such an important yardstick of performance.

In the capable hands of former racing driver, Andy Dawson, the Toyota Hiace 2.5 D-4D completed the 465-mile course on just 10.82 gallons of diesel. That's 43.04mpg - an impressive figure for a van carrying half its 1095kg gross payload.

For Andy Dawson it was an altogether different driving challenge from what he is used to, requiring tremendous anticipation and excellent throttle control and certainly a stern test of any commerical vehicle's fuel economy on the varied road conditions.