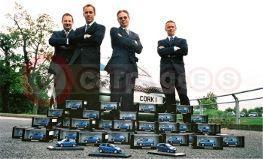 "They said we were getting compact cars, but this is ridiculous!" Drivers for Cork International were at a recent company conference when they were each handed a scale model of the Toyota Yaris car that is set to replace each driver’s delivery van. They were at the conference to hear details of a radical transformation, which Cork calls its "New Way".

The Nottingham-based organisation, one of Britain's biggest merchandising companies, switched to Toyota for its 200-strong light commercial vehicle fleet, and a proportion of its car fleet, two years ago.

Cork International supplies non-food items to more than 4,000 retail outlets, including the major supermarket and pharmacy chains, department stores and motorway service areas. It carries its own and third party branded products and is the biggest supplier of books to supermarkets and motorway outlets.

Now its fleet of Toyota Hiace vans is being replaced by five door Toyota Yaris 1.0-litre S models with air conditioning. The first batch of 74 was supplied on special order in September, with a further 100 or so due over the next 18 months as Cork's merchandisers adapt to a new way of working.

Where previously they had used the vans to deliver products to retail outlets on a daily or weekly basis, they are now spending more time checking and merchandising the goods and liaising with store managers, while the products are delivered by an outside contractor.

"This is the biggest operational change at Cork International for 20 years," said Finance Director Colin Triggs. "It's also a step up for the staff, who become first-line sales people rather than glorified delivery drivers. It's a better quality of job that requires sharp, high-calibre staff."

And ever since those merchandisers received their model Toyota Yaris they have been "very positive", both about their new roles and their new vehicles, says Colin. "They're very pleased about the cars. They're comfortable, and they like the fact that they have ABS and especially air-con, as they could be spending a lot of time on the road when the weather's hot.

"From a family perspective they're pleased to have been given five-door models, and switching from vans to the Yaris is relatively inexpensive for them in terms of company car tax, thanks to its low emissions, as well as offering good fuel economy."

Drivers are now expected to spend less time driving, and with more efficient routes will cover 20-25,000 miles a year instead of the 30-40,000 miles they drove before.

Their cars are being supplied on contract hire on a two-year/50,000 mile cycle through Lloyds TSB Autolease, which previously supplied the Toyota Hiaces. "Those vans proved very reliable when they were what was needed," said Colin Triggs.

"This is an unusual and forward-looking step on the part of a major customer, and we're pleased to be able to play our part in it," said Jon Pollock, General Manager of Toyota Fleet.

"The Hiace vans have once again proved their reliability in service with the Cork fleet, and we are confident that the Yaris five doors replacing them will be equally dependable, and serve to reflect their drivers' enhanced status."