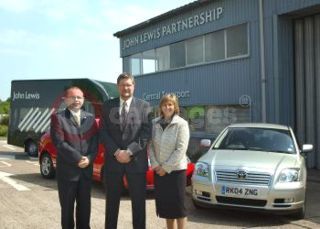 Toyota has become one of the two approved marques in the fleet of Britain’s largest private company and department store group, the John Lewis Partnership. Following a review in which Toyota emerged in first place, all its diesel and hybrid-powered cars are now eligible for use within the group.

Toyota was one of eight brands invited to submit a tender for John Lewis's "essential user" fleet at the end of last year. The four-year contract involves potential orders of as many as 200 cars a year on a two-year replacement cycle.

The John Lewis Partnership, based in Bracknell, Berks, includes 26 stores plus distribution centres and production units, as well as Waitrose food shops, online and catalogue shopping. The group's latest sales figures topped £5 billion for the first time, with trading profits of £277 million.

The organisation operates a fleet of 836 cars, half of them dual-badged and the remainder user-chooser vehicles for management. The dual-badged cars include 290 for essential users who provide staff training and other services, and 130 pool cars based at the company's branches.

"I was looking principally at whole life costings, including fuel, in the review," said John Lewis's Fleet Manager Chris Miles. "I also like the Toyota brand for the range of vehicles available and the reliability that goes with the product - also the fact that its engines are Euro IV-compliant. This obviously has tax implications for the drivers but also sends out the appropriate message for the partnership that these are clean, environmentally friendly motor cars.

"The whole Toyota range is covered by the agreement as long as it has a diesel or hybrid engine under the bonnet," said Mr Miles. "So far drivers have been choosing mostly Avensis and Corolla, but also quite a few RAV4s.

"Drivers have been very positive about the addition of Toyota to the scheme. They appreciate the Toyota brand because it gives them reliability and quality." Mr Miles also paid tribute to Toyota Fleet: "They’ve been incredibly helpful."

"This has been a very significant development for us," said Jon Pollock, Toyota Fleet's General Manager. "John Lewis's slogan since the 1920s has been 'Never Knowingly Undersold' and perhaps we should have something similar to reflect our commitment to providing value for money with Toyota products. Coming top in the John Lewis fleet review was very gratifying and we look forward to a fruitful partnership over the coming years."

If in doubt check with your local Car dealer as car prices and technical data will have changed since 2004.

Car Images may not be UK specification cars. Colours and exterior and/or interior elements may differ from actual models.