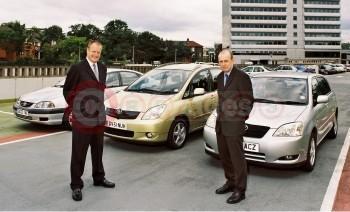 Toyota has become one of the three marques specified for UK staff of the British Standards Institution (BSI). The agreement was concluded in May and the first vehicle, an Avensis pool car, was delivered in July.

The BSI is based in Chiswick in west London, but its team of auditors and inspectors operates largely from home. The fleet of 450 cars provides mainly for these operational staff on a user-chooser basis, and the Toyotas take their place alongside Ford and Citroen vehicles.

"We review the fleet at regular intervals, and with each vehicle we aim to offer staff a car which can to do the job efficiently and which is also decent enough for private use," says Group Purchasing Manager Mark Slater. "Toyota offered us a good value package."

The BSI group of companies is a non-profit distributing organisation and Royal Charter company. With a turnover of £250m and representation in 112 countries, it is one of the world's biggest independent inspectorates and also the leading implementer of key business standards. It also tests products. The BSI's commercial success is used to underpin its core business as the world's foremost standards organisation.

Toyota vehicles specified for the fleet are mainly Avensis, Corolla and Corolla Verso though for senior staff there is some opportunity for higher-specification versions or executive cars such as the Camry. With the high number of around 180 renewals due in the coming year, Toyota is expected to attract an equal share of the orders.

Mark Slater reckons that more than two-thirds of those orders are likely to be for the Avensis, with its standard features such as satellite navigation likely to be an attraction. The Corolla Verso will, he believes, account for a high proportion of the remaining orders. "Mini-MPVs are proving very popular on the fleet," he says.

He also expects orders for diesel-engined cars to predominate. "We have been impressed by the diesel engines in the Toyota range," he says. "We need to be able to offer staff good-performing diesels so that they have the opportunity to lower their tax. Of the orders that have already come in, most have been for diesel.

"The cars are being supplied on contract hire through a number of leasing companies on a four-year/80,000-mile cycle.

"This is a very important agreement for us," said Jon Pollock, General Manager for Toyota Fleet. "By definition the BSI's standards are very exacting, but we believe that as company cars our range stands up to the closest scrutiny, particularly in terms of cost-effectiveness, reliability and performance."