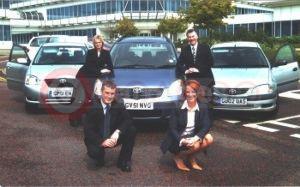 A comprehensive product range, diesel efficiency and competitive whole life costs have led the UK arm of BASF, the world's leading chemical company, to switch to Toyota as one of the two marques specified for its company car fleet.

BASF employs 93,000 people around the world and its products include chemicals, plastics, coatings, agricultural products, crude oil and natural gas. Its UK arm, based at Cheadle Hulme in Manchester, runs a fleet of some 500 user-chooser vehicles divided into four bands. One consists mainly of cars for senior managers, while the others cover working cars for management, the large salesforce and head office service staff, who travel nationwide to visit other group companies.

Toyota has been named alongside VW as one of BASF's two preferred marques. Toyota's Avensis and Corolla models are likely to make up a large proportion of the orders, though niche fleet vehicles such as the Previa and the RAV4 will also be available. The vehicles are being supplied by Hertz Lease on three-year contract-hire agreements, with annual mileages in the 20-30,000 range. Ashbrook Vehicle Management manages the BASF fleet.

The move to Toyota came about following a routine evaluation exercise, says BASF's Purchasing Manager Philip Coulter. "Our main consideration is to choose a product able to cover each of the four groups," he says, "but diesel technology has also become very important to us."

A key element in BASF's corporate philosophy is responsibility towards the environment. BASF looked closely at the diesel models available, as part of a move to improve on fuel economy while taking account of emissions-based taxation provisions.

Toyota's latest generation of common-rail D-4D diesel engines offer fuel efficiency up to 12% better than on an indirect-injection diesel and 30% better than on a petrol-engined car, along with low CO2 and also NOx emissions.

Whole-life costs were the clincher for Toyota. "It offered us a keen deal. We evaluated all the models from many manufacturers and when we calculated the pence per mile and whole life costs Toyota came out very favourably," says Mr Coulter.

"This is an important agreement for us," said Toyota Fleet's General Manager Jon Pollock. "BASF is a major player and we regard this as a vote of confidence in the strength of the Toyota range, and a reflection of the value for money offered by our vehicles.

"In the current climate it is also clear that our diesel technology is going to be an increasingly significant factor for Toyota."