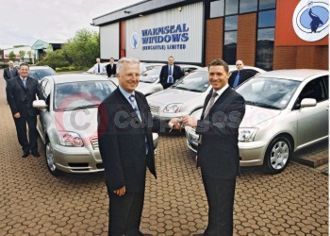 A window, door and conservatory manufacturer has switched its sales fleet to Toyota, and its procurement policy from outright payment to contract hire, in a move that looks set to prove popular with staff as well as management.

Warmseal Windows Ltd produces a range of PVCu windows, doors, conservatories and roof accessories. It has grown rapidly since its inception in 1987 to occupy four factory units on a 5 acre site at Throckley, Newcastle upon Tyne, where it employs 120 people.

The company previously ran Ford Focuses for its sales force but is now swapping these for eight 1.8 litre Avensis T3-X petrol hatchbacks, all supplied in silver. They will be used mainly within a 30-mile radius of Newcastle, covering up to 25,000 miles a year.

"The sales force were over the moon when they heard that they were getting Toyotas," says Operations Director Paul Jennison. "Not that they needed motivation, but the feeling was 'brilliant – that's the one car that would have us working that bit harder if we could'."

"We chose Toyota simply because it was so competitive cost-wise," says Mr Jennison. "For the money we felt we would be getting a better vehicle with a better spec. On the service side, while we would normally expect to keep vehicles for three years, with Toyotas we felt we would perhaps be able to extend it to four."

Another consideration was that the sales executives often needed to be able to carry heavy sample windows. "The boot provides quite a large storage space, and they can just be tipped into the back."

The contract hire deal was arranged through Toyota Financial Services, with the cars to be supplied and maintained through the Hodgson Toyota dealership in Newcastle. "We were given plenty of opportunity to get cars to try out, and both Hodgson and Toyota have been extremely helpful," says Paul Jennison.