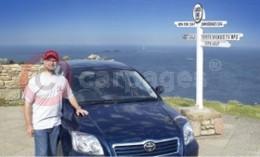 Fuel consumption of more than 75mpg has been returned in an Avensis 2.0-litre D-4D saloon – by a Toyota motorist driving the length of Britain on a charity run.

Alan Phillips completed his 839-mile journey from John O' Groat’s to Land's End on a single 60-litre tank of diesel with 10 litres to spare. His fuel economy was 30 per cent better than the 57.6mpg official extra-urban cycle figure for the new Avensis.

The marathon drive, which took place on Saturday, 12 June, is expected to raise more than £1,000 in sponsorship for Children In Need.

Alan, from Nottingham, works as a buyer and company fleet manager for a pet products business. His own daily transport is a 1.8-litre petrol Avensis which has impressed him with consumption figures in the high 40s mpg, even when fully laden for holiday journeys.

Toyota Fleet arranged for Alan to be supplied with a new Avensis and covered the cost of fuel and accommodation for the charity run. Alan set off at one o'clock in the morning and reached Land’s End at 7pm. By half way he was averaging 45mph and 78.3mpg; by Worcester the tank was still half-full. His highest reading, 81.3mpg, came at the end of the M5, but this figure was whittled down on the hills of the A30 to Land’s End.

The Avensis, with its 114bhp direct-injection common rail diesel engine, weighs in at 1970kg and its official consumption on the combined cycle is 48.7mpg.

Last year, driving instructor John Gough averaged 116mpg on an economy run from Land’s End to John O’ Groat’s driving a Toyota Yaris diesel. He went on to set a new world record for maximum mileage from one gallon of fuel of 130 miles, piloting the Yaris under test conditions at the Driving Standards Agency Training Centre.

"Alan Phillips's run, carried out at realistic road speeds, has underlined the sort of fuel efficiency obtainable even from a medium-sized car equipped with the latest generation of Toyota diesel engines," said Jon Pollock, General Manager of Toyota Fleet. "It also shows that the concentration needed for economical driving may help to keep drivers awake and aware!"