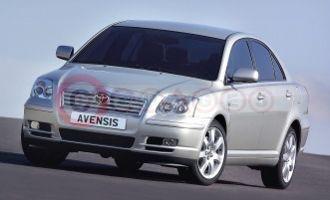 There is a lot to say about the new Toyota Avensis and the special qualities it will bring to the upper medium D segment when sales start on 1 March. As a gentle introduction to its many advances in technology, performance, handling, comfort and convenience, we thought we would go back to basics and the simple alphabet.

Forget all about A for Apple, because of course A is really for….

Avensis: the name was launched with the first generation model in 1997 and continues with the all-new range of saloon, hatchback and Tourer estate. Built exclusively at Toyota’s Burnaston plant, near Derby, the car completes Toyota’s core product line-up alongside Yaris and Corolla and is presented as the company’s European flagship model.

B is for Brakes: powerful and stable braking performance is one of the central elements of the new Avensis’s active safety package. Discs are used front and rear and all models feature ABS and Electronic Brakeforce Distribution (EBD). What’s more, all 2.0-litre petrol versions are equipped with Brake Assist (BA), Traction Control (TRC) and Vehicle Stability Control (VSC).

C is for Catalyst: catalyst technology has been advanced to deliver an engine line-up that combines performance and fuel economy with low emissions levels. This autumn Toyota will launch its Diesel Clean Advanced Technologies (D-CAT) system with a 2.0-litre D-4D diesel engine in the new Avensis. This includes a four-way catalyst to achieve big reductions in CO2, hydrocarbons, nitrogen oxides and particulate matter emissions.

D is for Design: the new Avensis is the work of Toyota’s own European design studio ED2 in the South of France. The intention was to create a classic, timeless appearance that would reflect the car’s in-built superior quality rather than taking a radical or futuristic approach. The saloon was the principle design from which the hatchback and Tourer evolved.

E is for Europe: the new Avensis has been designed, engineered and built in Europe and is Toyota’s new flagship model for the European market. The car has been tuned following extensive testing on European roads to ensure it meets the demands of local driving conditions.