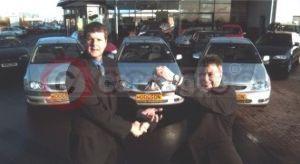 Six months after award-winning IT solutions company Croft plc switched its service fleet from Rover to Toyota, a survey has revealed overwhelming driver satisfaction – and management is delighted by the low fuel bills.

The Avensis cars are being used by Croft's field engineers, who carry out servicing and maintenance on customers' computer networks from their home bases throughout the UK. They are expected to cover around 35,000 miles a year. The models are Avensis VVT-i 1.6 Vermonts, with GS models for the senior engineers, although drivers are given the chance to ‘buy up’.

"These cars are bigger and offer a better ride. They are very comfortable and well-appointed, and the boot is much bigger which is what the drivers needed, because they need to carry as many spares as they can to fix the computers on the first visit. And the GS drivers wouldn't be without the sat nav," commented Croft’s Managing Director Phil Renton.

"But one of the best things from my point of view, especially as these are petrol vehicles, has been that the fuel consumption is so much better. The drivers are getting 40mpg as a basic figure on a mixture of motorway and city driving – unbelievable!

"Drivers are always over the moon when they first get a brand new car, but we wanted to know how they felt about them once they were used to them, so we conducted a telephone survey," continued Phil Renton.

Croft employs almost 100 staff and has a £6m turnover. The company's priorities in choosing a fleet car were first that the cars should be made in Britain and second that they could be supplied and supported by a dealership from the North-East, giving it the chance for a "rigorous" trial period before committing.

"It is very gratifying to get confirmation from both Croft's management and drivers that the cars are working out so well for them," said Jon Pollock, General Manager of Toyota Fleet.