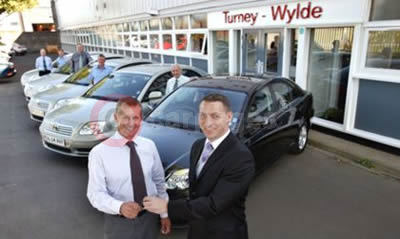 When a Tyneside building contractor and developer offered five of its managers their choice of company car, they all came up with the same answer - Toyota Avensis. As a result, Toyota has become the company's brand of choice.

Turney Wylde Construction Ltd of Wallsend, Tyne & Wear, has a workforce of 80 and runs a fleet of 25 vehicles. It had previously operated a restricted-badge policy, mainly running Fords. As part of a review of its policy accompanying a move to new premises, it embarked on several months of trialling various makes and models, including the Ford Mondeo, Mazda6, Renault Laguna as well as the Toyota Avensis, before giving its staff the final vote.

"Instead of going for a mix we had thought it would be best to go with a particular brand, and all five drivers came back and said they wanted the Avensis," said Company Accountant Richard Emerson, who is responsible for purchasing Turney Wylde's vehicles. "The space factor was important, as well as comfort, and I think prestige came into it as well, with the managers feeling that the Avensis offered a bit more status." While too early to comment on whole-life costs, Mr Emerson said: "My impression is that we'll do better with the Avensis."

The good impression created by the 2.0 D-4D diesel manuals - supplied in T2 form for three site managers and T3X for two contract managers - has continued since they were delivered in September. "The drivers are all very pleased with the new cars," said Richard Emerson. The vehicles were bought outright through local Business Centre Hodgsons Toyota Newcastle and will be replaced after three years or 60,000 miles. "Both Hodgsons and Toyota Fleet have been very helpful," added Mr Emerson.