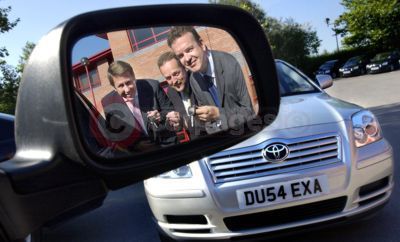 One of Europe's largest single-site recruitment companies has switched its UK sales fleet from Ford to Toyota, with an initial order for 10 Avensis hatchbacks. LA International, based in Stoke-on-Trent, was set up in 1982 and now operates in 23 countries. Its eight specialist divisions provide a wide range of organisations with contract and permanent IT and engineering staff, and it has an impressive customer base, delivering resource solutions to 90 per cent of FTSE-100 companies.

The company, which has until now reviewed its car fleet on a three-yearly basis, had provided Ford Mondeos for its sales consultants for more than nine years but decided to change to Toyota following its most recent review, settling on 1.8-litre petrol Avensis T2s.

"We looked at five other possible makes this time but Toyota came out on top with the Avensis," said LA International's Managing Director Scott Henry. "The change suits the people driving the cars, who like the Toyota's image, and also fits well with the sort of impression we wish to make on customers," he said. "At the same time the Avensis came out well in terms of running costs and whole life costs – so it was a case of the whole package working for us."

The vehicles have been purchased outright through local Toyota Business Centre Pinkstones and, with the switch to Toyota, are expected to be replaced after four rather than three years.

"Our sales staff are mainly office-based, so their mileages are not particularly high," said Scott Henry. "Over the four-year period we would expect them to vary from 30,000 to 60,000 miles." Individual orders for Toyota Avensis cars are expected to follow the initial 10 as other sales fleet vehicles fall due for replacement. LA International's drivers were fully involved in the selection process.

"Pinkstones was very helpful in providing test cars and our drivers were able to take them home overnight to help form an impression," said Mr Henry. The initial 10 vehicles were handed over this week.