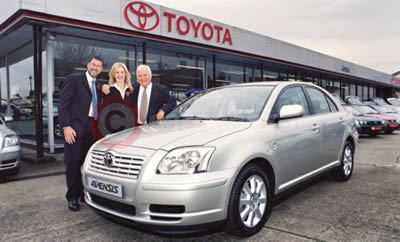 Satellite navigation as standard on the Toyota Avensis has proved a prime attraction for a fast-expanding medical consultancy service, which has recently taken on 15 of the cars and has 15 more on order.

Magister Consulting, based in Dartford, Kent, provides back-up for GPs and the NHS. Its team of registered nurses and IT facilitators visits surgeries throughout the UK to help make their operations more effective. The company has around 80 company vehicles, though because of continued rapid expansion its fleet size is expected almost to double over the next year. It is now providing Toyota Avensis 2.0 D-4D diesel hatchbacks for its operational staff, in the T3-S grade which includes TBT satellite navigation and electronic traffic avoidance. The vehicles are replacing VW Golfs.

"The field staff are going to different places every day, so finding the next day's location, printing maps and directions and so on used to take up quite a bit of their evenings before," said Magister Consulting's Fleet Manager and Head of Resources Bruce Rainbow. "Now they can just pop straight into the car, punch in the address and off they go. It's made their days a lot less stressful.

"Everyone is absolutely over the moon, especially with the satnav system, but it's also a nice car to drive, bigger than the Golf and with a cavernous boot. The drivers have to cart quite a lot of gear around with them, particularly the nurses with their machinery, and there's plenty of room in the boot to house it all."

Magister Consulting is also pleased with its decision to switch from petrol to diesel, said Mr Rainbow. "We're getting around 44mpg with the Avensis, a lot better than the previous 35mpg or so. People are also saving on their individual taxation, because the Euro 4-compliant engines have a 155 CO2 emissions rating compared to the 170 they had before."

Mileages vary widely, with staff in the South-east tending to cover less ground than those in regions further north, who may also have to cover southern assignments if required. "It could vary from 35,000 to 90,000 over the three-year contract-hire period," said Bruce Rainbow. The vehicles are leased from Hitachi Capital Vehicle Solutions, and delivered direct to drivers working from their homes, with maintenance carried out by local dealerships.

Magister Consulting is part of the Interpublic Group, the world's third-largest advertising, PR and marketing conglomerate. Another Interpublic subsidiary operating in a similar field as Magister in the UK, McCann Managed Care, has just taken on two Toyota Avensis and six Corolla cars.