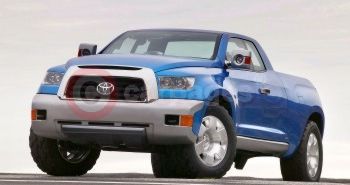 Toyota has used the occasion of the North American International Auto Show – the Detroit Motor Show – to unveil a radical new concept vehicle, the FTX pick-up. And even before the show began, Toyota was celebrating the success of the Prius, newly named North American Car of the Year.

The FTX is not destined for production, but does give pointers towards Toyota’s future full-size pick-up truck plans. Developed by Toyota Motor Sales USA and Toyota’s Calty design centre in California, the hybrid power FTX demonstrates bold styling with a heavily sculpted body and massive front end.

Far from being just an eye-catching design exercise, the FTX is packed with practical touches. Key features include a double cab arrangement with rear-hinged rear doors that open to 90 degrees for easy access, removable rear seats, a loading ramp that can be extended when the tailgate is opened, and a multi-function unit concealed beneath the rear skid plate that houses an electric generator, air compressor and other system outlets.

In the cab, key instrumentation and a control lever are mounted in an armrest angled towards the driver, creating an integrated work station. Driver and passenger seats have their own suspension system for a smoother ride and the driver’s seat is set particularly high with a high steering wheel angle to give a feeling of total command.

The FTX is almost 19 feet long, seven feet wide and six-and-a-half feet tall. It is powered by a hybrid system that combines a large-capacity V8 petrol engine with an electric motor, delivering large amounts of torque while returning fuel economy to match conventional V6 power units.

Pick-up trucks are a key part of the US new vehicle market and the FTX follows on from Toyota’s recent launch of the Tundra Double Cab full-size pick-up. Toyota has a strong truck heritage in America, going back to the FJ Land Cruiser of the 1960s and 70s and the hugely successful compact pick-up of the 1980s and 90s. Tundra models are built in the US and production is set to increase in 2006 with the opening of a new Toyota pick-up plant in San Antonio, Texas.

The exceptional success of the new Toyota Prius in the USA since its launch there in early autumn last year has continued into 2004 with the car winning the accolade of North American Car of the Year.

The title has been bestowed on the advanced, hybrid power Prius by a panel of leading automotive journalists in the USA and Canada. It emerged an emphatic winner from a field of 17 models, outscoring the second-placed Mazda RX-8 by more than 130 points.

Demand for the Prius in the US has outstripped Toyota’s expectations and prompted an increase in production. In the UK Toyota anticipates full year sales of around 1,600 units, following the car’s launch on 2 January.