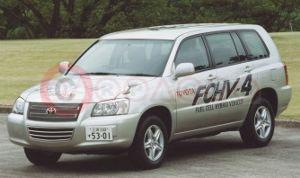 TOYOTA MOTOR CORPORATION (TMC) has announced that the Toyota FCHV (Fuel Cell Hybrid Vehicle) has become the first-ever market-ready fuel cell vehicle to be certified by Japan's Ministry of Land, Infrastructure and Transport. TMC plans to start leasing the Toyota FCHV on Dec. 2.

Toyota announced in July that it would market about 20 fuel cell hybrid passenger vehicles in Japan and the U.S. over a period of 12 months starting at the end of 2002. Since then, TMC has been focusing on the development of the vehicle and a vehicle support system and has raised these elements to a dependable level in preparation for ministry certification.

Initially, four Toyota FCHVs will be leased to customers in the Tokyo metropolitan area, which will shortly have in place the necessary infrastructure, including hydrogen supply facilities, an inspection and maintenance system and a system to address traffic mishaps. The Cabinet Secretariat, the Ministry of Economy, Trade and Industry, the Ministry of Land, Infrastructure and Transportation and the Ministry of the Environment will be the first customers.

From the start of its fuel cell vehicle effort in 1992, TMC has constantly pursued in-house development of a proprietary fuel cell, the core component of any fuel cell vehicle. The Toyota FCHV features the result of this effort-the high-performance Toyota FC Stack.

The Toyota FCHV is an advanced FCHV with enhanced reliability and durability and is based on the FCHV-4 prototype, units of which have accumulated approximately 130,000 kilometres in trial runs, both on test tracks and public roads.

By applying the hybrid technologies honed in the Toyota Prius and other Toyota hybrid vehicles, the Toyota FCHV finely regulates power flow from the Toyota FC Stack and battery to achieve both high efficiency and luxury car-like quiet and smooth driving performance.

The Toyota FCHV also has a lighter body with a roof, fenders and other components made of aluminium, one of the best aerodynamic performances in the world for an SUV-thanks to a flat underbody, and LED brake lights and taillights for minimum power consumption. And it comes with an environmentally considerate air conditioner originally developed for the FCHV-4 that uses CO2 (rather than CFC) as a coolant.

Plans to market the Toyota FCHV in the U.S., also by the end of 2002, are on track as well, and Toyota Motor Sales, U.S.A., Inc. will soon release details on its FCHV program.