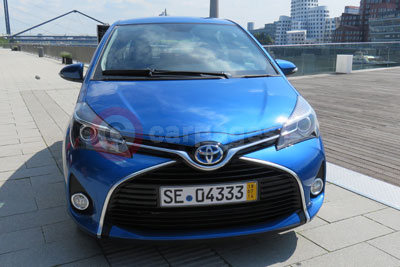 With global sales round the three million mark, the Toyota Yaris has been a massive success since it was first unveiled back in 1999.

Now in its third generation, the car that accounts for 35 per cent of Toyota sales in the UK, has just undergone a major mid-term facelift with plenty of attention given to customer feedback.

As a result the new 2014 Yaris features a more dynamic design, a richly-equipped trim line-up, the introduction of an ultra-efficient 1.0-litre three-cylinder engine, improvements to ride and handling along with better insulation to reduce noise.

And there is a good selection of powertrains on offer too with 1.0 and 1.3-litre petrol engines, a 1.4-litre diesel and the most frugal of the line-up - a 1.5-litre petrol hybrid engine.

New Yaris has undergone quite a transformation design-wise with a new-look front end. The two trapezoidal grilles now merge at the point of the Toyota emblem to form a powerful cross shape, although it's not quite as dramatic as the new Aygo.

In addition, stand-out features include new headlamp clusters with LED daytime running lights an option on the Icon and standard on all higher grades.

View the Yaris from the back and you will notice a revised bumper design which helps to portray a wider and sportier stance. And the tail-light clusters feature a new LED graphic. Once again this is an option on Icon and standard on all grades higher.

Existing customers also requested an improvement to the interior quality of the Yaris and Toyota has obliged. It's a case of out with the cheap plastic surfaces and in with the more upmarket soft-touch materials on the dashboard and doors.

All four trim levels are well equipped and buyers have the chance to stay connected to all their multi-media devices thanks to the Toyota Touch 2 system which comes as standard on the top three grades.

Toyota hopes that half of all Yaris sales will be hybrid by 2020 so it was that car in the Icon trim - which is expected to account for 62 per cent of sales -I took out on test in Germany.

The new Yaris hybrid system features a four-cylinder Atkinson cycle 1,497cc petrol engine that works in conjunction with an electric motor for a combined total output of 98bhp.

The new model sees a reduction in carbon emissions from 79g/km to 75g/km and an increase in combined fuel efficiency to 85.6mpg.

The car is fitted with a much improved e-CVT automatic transmission which is far more responsive and smoother than its predecessor. If you are gentle with your right boot, you can pull away in the complete silence of electric vehicle (EV) mode and as you push on the petrol engine kicks in as and when required.

It's not the fastest out of the starting blocks taking 11.8 seconds to reach 62mph but it's a smooth transition of speed this time round.

The car's steering has also been upgraded so it feels much lighter and responsive which is a bonus when negotiating twisting roads or tight bends.

And the improvement to the car's all-round insulation is definitely noticeable although at higher speeds you can still expect to hear a fair amount of engine, road surface and even wind noise.

This is a 7-year+ news article, from our Toyota archive, which dates back to the year 2000.

If in doubt check with your local Toyota dealer as car prices and technical data will have changed since 2014.