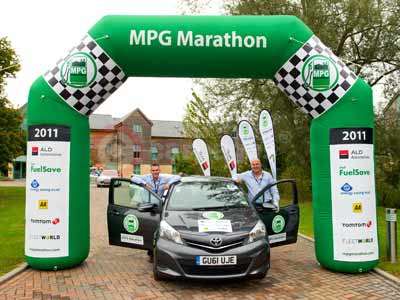 The new Toyota Yaris completed the 2011 mpg Marathon having consumed 23.2 litres over the 350 mile route, achieving 72.29mpg, placing it in top position in its class for petrol cars emitting less than 120g/km of CO2 and beating the official combined figures of 58.9mpg be nearly 23 per cent.

The mpg Marathon demonstrates how smarter driving techniques can help motorists save money. The event was held on 5th and 6th October 2011, with 38 cars and vans entering in five classes. The Toyota Yaris was driven by James Sutherland and Richard Hill from Peak performance. The Toyota Prius was driven by Steve Johnson and Steve Heyworth.