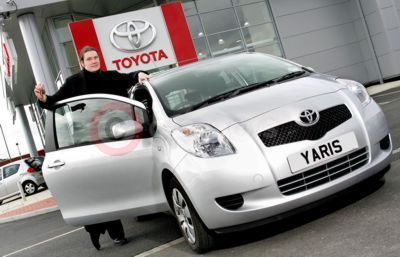 Back in the Swinging Sixties, Toyota made a modest entry into the British car market with just a single model on offer. Forty years later, Toyota GB is celebrating its two-millionth new car sale in the UK, with the delivery of a new Yaris to a first-time customer from Lancashire.

It is an early landmark in a year in which Toyota aims to achieve annual sales of more than one million vehicles across Europe for the first time.

Robert Gardner was the unsuspecting purchaser of the landmark car, a three-door 1.0-litre T3 model in Crystal Silver, acquired from RMB Toyota Northallerton. It’s the first Toyota he has owned and he is clearly impressed by its winning qualities.

"The Yaris is very well built and, even though I am quite tall, I’ve found it very spacious for a compact car. I have to travel a great deal with my job and it’s important my car is comfortable and reliable," said Robert, a 29-year-old IT contractor from Manchester.

Neil Heilbron, Sales Manager at RMB Northallerton, said: "We’re proud to have organised the sale of the two millionth Toyota and are sure that Robert will be the first of many more thousands of new owners who will lead Toyota on to its three millionth UK sale. New Yaris is one in a great range of models with immense buyer appeal."