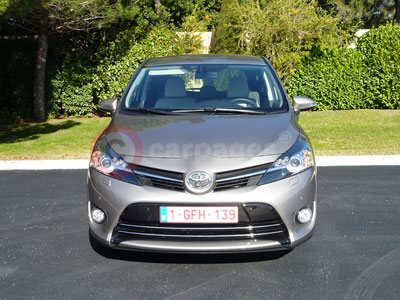 But not content with this revamp which saw 470 parts changed on the Verso, Toyota has now introduced some further upgrades for its 2014 model.

There is a new snazzy Avantgarde Bronze colour, additional seating and upholstery options, new 17-inch alloys with a smoked silver finish, some additional technology and most important of all, a very frugal yet punchy new 1.6 diesel engine.

And it's this engine that's likely to grab the headlines with its potential fuel efficiency of a combined 62.8mpg and carbon emissions of 119g/km. These impressive figures are assisted by the start/stop technology which has also been introduced as standard.

The new engine was sourced from the BMW group where it has been used in the MINI Cooper D and then tweaked and re-engineered by Toyota technicians to meet its own design and packaging requirements.

The introduction of the 1.6 D-4D 110bhp unit sees the demise of the old 2.0-litre diesel engine from the Verso line-up. It will also only be available mated to a manual gearbox with no plans to introduce an automatic option in the pipeline.

There is also a new trim level to choose from called Trend and this takes the number of grade options to four - Active, Icon, Trend and Excel.

This latest spec adds a splash of extra style to the Verso thanks to rather distinctive black C-pillars that help to create a floating roof effect, similar to that seen on the latest Toyota Yaris Trend.

Standard on all Trend models and a £650 additional option on Icon and Excel grades is the new Toyota Touch 2 with Go system which really helps you stay connected on the move with real-time traffic information and a host of other features.

I tested out the new Verso fitted with the highly economical 1.6 D-4D engine on a demanding road route that included exceptionally steep inclines, sharp hairpin bends and faster motorways where you could really put your foot down and it came through with shining colours.

This six-speed manual model has a power output of 110bhp and 270Nm of torque and this is the car billed to achieve 62.8mpg on a combined run. We didn't quite mange to match the official figure coming up short at 46mpg, but in fairness to Toyota, the route was a testing one and there were three adults in our car along with luggage.

Admittedly, it's not the most dynamic MPV on the market, but Toyota claims to have re-worked the transmission system in tandem with the new engine to maximise power when accelerating hard through the lower gears and delivering a comfortable and quiet cruising speed in sixth gears.

The acceleration is smooth and rapid when required and the Verso can certainly cruise along comfortably at higher speeds with plenty of power at your disposal.

The steering feels a little light at times which can be a tad daunting, but that aside, the performance was up to the challenge.

This is a 7-year+ news article, from our Toyota archive, which dates back to the year 2000.

If in doubt check with your local Toyota dealer as car prices and technical data will have changed since 2014.