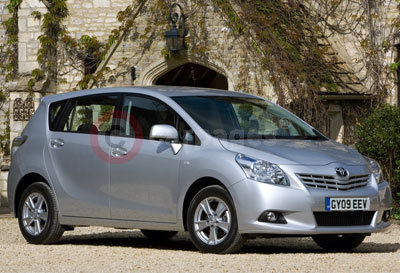 The new 2009 Toyota Verso continues the winning streak of its predecessor, taking the title of Best Small MPV at the Fleet World Honours awards for the third consecutive year.

Presented today at the RAC Club in Pall Mall, Richard Balshaw, General Manager for Fleet collected the award and said, "To have retained this award for the third year running is very satisfying. The new Verso with Toyota Optimal Drive raises the quality level in the small MPV market. This is achieved with enhanced specification and safety features, plus improvements to the innovative Easy Flat-7 seating system."

Ken Rogers, Fleet World Editor said: "Based on the Auris platform, the new Verso benefits from Toyota's 'Optimal Drive' technology, a package of features which increased power output by up to 20 per cent, while at the same time achieving reductions in emissions and fuel economy of up to 12 per cent.

"Setting out to appeal to more than just the family audience, new Verso follows in the tyre-tracks of Corolla Verso in terms of seating/load-carrying versatility. And Verso is a full 7-seater. There is a clever fold-flat feature for all five rear seats which significantly boosts both convenience and load-lugging capability for bulky items.

"Important from the fleet perspective, the 2.0 D-4D 130 version hits the target for appropriate taxation/green credentials by keeping beneath the 160g/km Capital Allowance break-point."