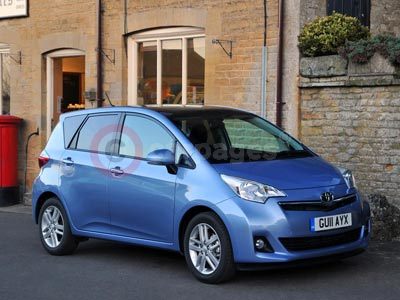 When it comes to size, on the outside the new Toyota Verso-S is the smallest of the market's mini-MPVs. But clever design and packaging mean that the space on offer inside is close to what you will find in a compact family hatchback.

Toyota has a great track record for maximising the room inside its small cars, as witnessed in models such as Toyota iQ, Aygo and Yaris. With Toyota Verso-S every detail has been addressed to make life on board more comfortable for occupants and to build-in equally generous and flexible loadspace.

Overall Toyota Verso-S is less than four metres long, but its 2,550mm wheelbase means the cabin is fundamentally well-proportioned, reflected in 120mm of headroom for driver and front passenger and generous space all-round for rear seat passengers. The front seats have thinner internal frames (without compromising their Whiplash Injury-Lessening safety performance), which means more knee-room for those in the back, and even the rear door trims are thinner towards their bottom edge, to give more "foot-room" when getting in and out of the car.

The rear seats are divided 60:40 and have a simple one-touch flat-fold mechanism. Toyota Verso-S makes life even easier by providing additional control levers to fold the seats down on each side of the boot space - a feature not found on any of its mini-MPV rivals.

With the rear seats in place, the loadspace can swallow 336 litres of cargo. Toyota Verso-S comes with a lightweight deckboard than can be moved between two positions to suit loading requirements. Moving it to its lower level - a one-handed task - increases the load depth by 120mm and overall capacity by another 57 litres. Furthermore, on T Spirit models, which come with a tyre repair kit, the well usually occupied by the spare wheel is freed up, taking the loadspace up to 429 litres.

With the rear seats folded flat, the VDA measurement for load-carrying extends to a maximum 1,388 litres.

Around the cabin there are 19 separate storage points, including door pockets, bottle and cupholders, a tray beneath the front passenger seat and a three-level dashboard compartment.

The Toyota Verso-S is on sale now.