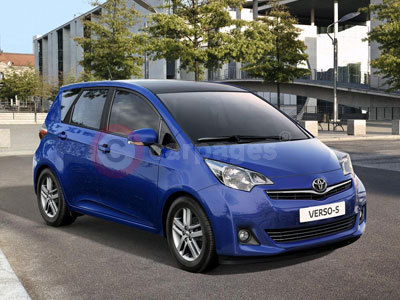 Toyota will return to the mini-MPV (B-MPV) market in 2011 with the new Toyota Verso-S, its first contender in a segment it created itself in 1999 with the launch of Toyota Yaris Verso.

Toyota Verso-S will compete in part of the European new car market that has almost tripled in size since 2002, thanks to more motorists downsizing and seeking small cars with high levels of interior flexibility.

Small, spacious and smart, the Toyota Verso-S showcases efficient space management. Although it measures less than four metres long - it is the shortest model in the European B-segment - clever packaging delivers remarkable room for both those on board and their luggage.

The 60:40 split rear seats have a centre arm rest and a one-touch fold-flat mechanism. Unlike any other competitor model in the mini-MPV segment, the seats can also be folded down from the boot, thanks to tilt-down levers provided on the loadspace sidewalls, within easy reach of the rear door.

Multidrive S, Toyota's continuously variable transmission is available as an option. It features a manual override seven-speed sequential mode which the driver can operate using paddle shifts mounted on the steering wheel, or the gear lever. In models equipped with this system Toyota targets 54.3mpg combined cycle fuel consumption and 120g/km CO2 emissions.

Toyota marks a first in the mini-MPV segment by equipping the Toyota Verso-S with a new 6.1-inch, full colour Touch Screen Multimedia Interface. This gives clear and easy access to controls for the radio, CD/MP3 player and Bluetooth. There is also a USB port for connecting portable music players, and the screen can display album cover artwork (with compatible music players) and present the real-time view from a rear parking camera.

At a later date, Toyota will introduce Navi-Box as an option, a booster system that allows pictures to be viewed and music to be sorted from a USB-connected source.

Navi-Box enhances satellite navigation functions, with speed camera warnings and motorway signage, and it gives access to Google-connected services, for example points of interest that can be downloaded from the internet and entered as destinations. Other applications include links to social networking services, fuel prices, news and weather reports.