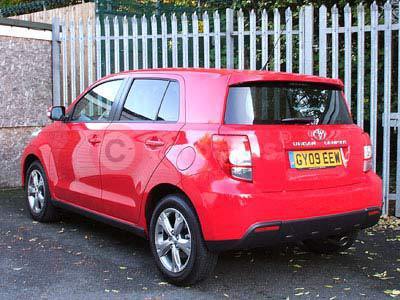 It is all credit to Toyota's Optimal Drive efforts that the test car felt as if it housed a larger engine, such was the surprising ease with which it overtook, especially at motorway speeds. This, combined with almost effortless driving around town, makes it a good all-rounder. Both versions have a new 6-speed, manual gearbox for getting the drive to the wheels and the ratios are such that in an urban environment, the driver doesn't have to keep changing gear to find the right one.

On the open road, the wide stance of the Toyota Urban Cruiser goes a long way to providing its stability. The engine is willing to play and the suspension is just right; bearing in mind that it is a family car.

The driver sits quite tall in his height-adjustable seat, which should provide good all-round visibility but I found that the roofline and rearview mirror were an obstruction but more of a mild annoyance than a real problem.

The Toyota Urban Cruiser's multifunctional steering wheel and column is rake and reach adjustable, which makes it easy to find a comfortable position in front of the unusual instrument nacelle. The central dial is framed in a 'shield-like' housing with two outer panels set directly into the dashboard. The main cluster is covered by a smoked glass, non-reflecting, plate. It remains dark until the start button is pressed, at which point the two needles for the tacho and speedo, appear to 'ping' into life.

In the left panel is a gear-shift indicator that shows the right time to change up or down in order to achieve the best fuel and emissions levels and on the right is the warning lights and information panel.

The fascia itself is plain and functional with a small, dual glovebox and a chrome-coloured centre console. The protruding comfort controls very similar in design to those in the Toyota Aygo, that is to say, chunky and fun. Above this in the Toyota Urban Cruiser test car, was the optional, £830 satellite-navigation system with its full-colour, touch-screen, while at the base of the compact panel are a cubby, two cup-holders and the high-level gear-shift.

This together with some trims on the doors panels, serves to brighten what is a fairly dark cabin. That said it is comfortable and upholstered in a serviceable knit fabric. Leather is available as an £840 option but isn't necessary as the cabin feels quite plush, anyway.