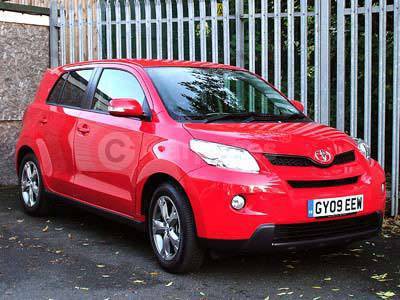 In recent years the traditional B-segment hatchback has seen one or two changes. The definition has become blurred with 5-door hatch describing anything from a Chevrolet Matiz to a mini MPV, supermini or SUV.

So, there are widely differing vehicle segments with the same parameters but people have come to expect cars that are capable of spanning the gaps; that is to say, suitable for most eventualities, good looking, good fuel economy and not too expensive.

The Toyota Urban Cruiser (SUV) is one of those cars that ticks all the boxes, as they say.

At first glance, it looks similar to the Kia Soul. Although the Toyota's styling is not quite as 'boxy', the deep doors, high belt-line and heavily-contoured rear end promise plenty of interior space.

The stubby front end of the Toyota Urban Cruiser is very distinctive with bold louvre grilles at the leading edge of the high bonnet, making a statement of intent. Either side, are the angular headlight clusters, while below, the chunky front bumper houses the beady fog lights.

There are front and rear under-guards finished in black, which contrast nicely with the test car's bright red paintwork. The undertrays, together with the wide stance and muscular wheelarches, resemble the larger Toyota Land Cruiser and the rugged looks suggest an off-road capability, which turns out to be more than a suggestion.

The Toyota Urban Cruiser comes in two versions; the 1.33 Dual VVT-I and the 1.4 D-4D diesel. The latter comes with Active Torque Control all-wheel-drive - a combination that is only available in the UK. AWD it may be but as befits the name, the Toyota Urban Cruiser is more suited to the streets than mountain climbing but does have enough traction and ground clearance to cope with snow or wet grass.

The Active Torque Control works in conjunction with the other on-board traction control systems allowing torque to all four wheels as necessary; not just for traction but also for better cornering. During braking the electronically-controlled coupling is disengaged so that it doesn't diminish the efforts of the ABS system. Under normal circumstances, only the front wheels are driven and this on-demand system is just one way of keeping the fuel consumption down; not that the diesel-powered Toyota Urban Cruiser is thirsty in the first place.

Shoehorned under the bonnet of the Toyota Urban Cruiser test car was the alternative, 1.33 petrol unit. Like the diesel, it is part of the 'Toyota Optimal Drive' range, which means using technologies, mechanical and weight-saving measures to achieve the best mix of performance, economy and low emissions, without losing driving enjoyment.

Although the Toyota Urban Cruiser's petrol engine doesn't come with AWD, it does have Stop&Start technology and, I have to say that after a period of idleness, it fires up again very quickly indeed. Add to this the Dual VVT-I system, or Variable Valve Timing, with its high compression ratio and we're on our way to good fuel economy. Official figures are posted as: 42.8-, 57.7- and 51.4mpg for the urban, extra-urban and combined, respectively. This is not too far adrift from the diesel's figures and neither is the 129g/km CO2 emissions, so both are in VED Band D.