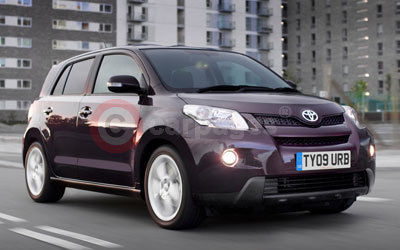 The new Toyota Urban Cruiser signals a new industry milestone in achieving the world's lowest CO2 emissions for a four-wheel drive car. The figure of 130g/km for the 1.4 D-4D AWD model is one aspect of the all-round environmental excellence that Toyota has achieved with its new B-segment hatchback crossover.

Scheduled to reach UK showrooms in May 2009, the Toyota Urban Cruiser is the latest Toyota model to benefit from Toyota Optimal Drive, advanced powertrain design and engineering that is making engines more powerful, while at the same making them more fuel efficient and less polluting. Its low emissions performance will add to Toyota's progress towards achieving an average 140g/km across its full model range during 2009.

Stop & Start turns off the engine when the car comes to a halt, the gear shift is moved to neutral and the clutch pedal is released. Automatic restart is instantaneous as you engage the clutch again to select a gear ready to pull away. This has a significant impact on fuel consumption and emissions and can achieve a reduction of up to four per cent in urban driving.

The 100bhp (101 DIN hp) engine in the 2WD Toyota Urban Cruiser emits 129g/km of carbon dioxide and has an official combined cycle fuel consumption of 51.4mpg. The engine's design benefits from Toyota's extensive motor sport experience in being exceptionally lightweight and compact, with a small bore and long stroke, giving a very high power to weight ratio. Its efficient performance is also promoted by its high, 11.5:1 compression ratio.

Toyota is offering a comprehensively revised version of its 1.4-litre D-4D common rail diesel engine in Urban Cruiser, exclusively with all-wheel drive. Equipped with the latest piezo-electric injector technology and a diesel particulate filter (DPF), it produces just 129g/km of CO2, the world's lowest figure for an AWD drive car powered by an internal combustion engine.

The piezo-electric injectors work at exceptionally high pressure and can supply larger, more precise volumes of fuel at twice the speed of conventional injectors. This means they can deliver multiple injections in each combustion cycle, giving responsive engine performance with low fuel consumption and reduced emissions.

Both engines use a new six-speed transmission, which also benefits from the application of Toyota Optimal Drive technology. Gear changes are quiet and smooth and a wide sixth gear ratio helps the powertrain achieve world-class levels of efficiency and fuel economy.