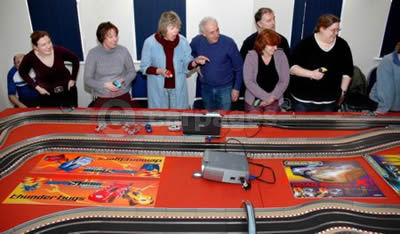 The UK's biggest ever gathering of Scalextric-type slot car fans will be held at Toyota GB's HQ in Burgh Heath, Epsom on 21 and 22 May.

Aimed at collectors, racers as well as those just wanting to revive childhood memories, the two-day event will include races, displays of rare cars and stalls selling old and new models.

Organised by the NSCC (National Slotcar Collector's Club) to mark its 25th anniversary, a focal point of both days will be the finals of the NSCC International Race Championships on five massive tracks. Over 40 racers from several countries will converge on Epsom to race six different types of car to see who is the best of the best.

There will also be tracks and cars for the public to try, including the latest digitally controlled systems that allow up to six cars to race - including changing lanes to overtake - on a standard two-lane track.

Although the Scalextric brand name is synonymous with the hobby of slot car collecting and racing in the UK, it is a flourishing pastime around the world, particularly in Germany and Spain.

All the top makes - Scalextric and MRRC from the UK, SCX, Fly and Ninco from Spain and Slot.It from Italy - will be bringing displays. In fact, it will be like the motor show and Grand Prix combined only in 1/32nd scale!

Toyota will also display some full size racing cars and an F1 simulator.