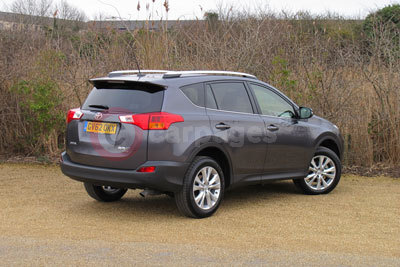 Ride quality is generally quite reasonable. Don't expect soft, spongy comfort, as it is set towards the firmer edge, but it won't rattle your fillings. The design brief for the car was for it to have sporty handling, but that has not entirely translated into the finished feel. You are aware of the car's height and bulk as you power through the bends. It is more nimble than some of the heavier 4x4s, but many manufacturers have upped their game considerably in the handling department, and the RAV4 handles acceptably but it doesn't shine against some of the competition. It does not feel as dynamically talented as some of its rivals.

The RAV4 is now quite a big car, over four and a half metres long. That has enabled Toyota's engineers to shoehorn some extra space into the boot area, and it has a minimum capacity of a generous 647 litres with all the seats in place, and extending to 1,746 litres with the rear seats folded. That makes it more commodious for all your kit than most of its similarly priced rivals. For example, it has over 190 litres more boot space than a Ford Kuga. Nor is its cargo carrying prowess achieved at the expense of passenger knee-room. There is plenty of that, so anyone sitting in the back has ample space even with tall people in front.

You sit quite high up in the RAV4 and it has large windows and reasonably narrow front pillars, so you get a good view out of it. The rear pillars are quite thick, and the car bulges a bit at the tail end, so you would need to be careful with manoeuvring, although it's not a problem in this model with a standard reversing camera. Our test car came equipped with a puncture repair kit rather than a spare wheel, which is a point to check if you prefer to drive a car with an on-board spare.