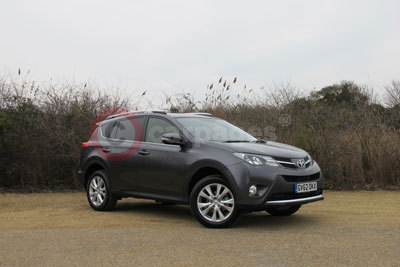 Toyota was an early starter in the family 4x4 arena. The original RAV4 was one of the first so-called ‘soft-roader’ all-wheel-drive cars. That was 20 years ago, and the RAV4 is now in its fourth generation, with the latest model newly arrived in the UK for 2013. Its predecessors have been very successful for Toyota. Over the first three generations of the car, some 4.5 million have been sold around the world, including 155,000 of them bought here over two decades.

This latest RAV4 has undergone substantial changes that move it on a very long way from the neat and nippy little trend-setter RAV4 of the 1990s. With each generation the car has grown a bit bigger, and this new one is eight inches longer and just over an inch wider than its immediate predecessor. The wheelbase has been stretched by four inches, but the car sits fractionally lower than it used to. Another notable change is that a distinctive feature of previous RAV4s - the spare wheel mounted on the rear door - has gone. Instead, in those versions with a spare wheel, it is now located under the tail of the car, in space created by the extra body length. The RAV4 also has a re-designed dashboard, more room in the cabin and extra equipment.

This five-door, five-seater SUV is designed and built in Japan. There are three engines and three trim levels on offer. The petrol model has a two-litre, 149 bhp engine with a CVT (continuously variable) auto transmission and four-wheel-drive. There are two diesel versions: a two-litre, 122 bhp turbodiesel with a six-speed manual gearbox and front-wheel-drive; and a 2.2 litre, 148 bhp turbodiesel with either a six-speed manual or six-speed auto transmission and standard four-wheel-drive. Trim levels are Active, Icon and Invincible.

Even though this latest RAV4 is bigger than before, its 2.2 litre engine does a good job of hauling a car that weighs over one and a half tons. It is a gutsy performer with plenty of go. For those interested in hooking a caravan or trailer onto the back, it has an excellent towing capacity of 2,000 kg. The 60 litre fuel tank gives a theoretical range of 655 miles, based on the official combined fuel figure.