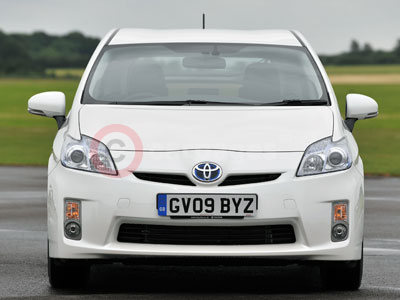 The title of WhatGreenCar Car of the Year 2009 has been awarded to the 'next generation' Toyota Prius, due to be launched in the UK on 1st August 2009.

The new Toyota Prius was chosen from a short-list of 10 green car finalists which were test-driven at Imperial College, London, by six of the UK's leading green transport and environmental experts. The judging was completely independent and showcased the most innovative green cars available to drive in the UK during 2009.

Dr Ben Lane, Managing Editor of WhatGreenCar said: "While this year's judges were rightly impressed by the range of green car technologies employed by the 10 car short-list, they were unanimous in their acclaim for the new Prius. In addition to the new model's best-in-class cradle-to-crave environmental credentials, the panel particularly commented on the way the car seamlessly integrates green features as part of its design. If Apple made a car, it would probably be the third generation Prius".

With a lighter and more and compact power-train, the latest Toyota Prius is greener than ever with a best-in-class WhatGreenCar environmental rating of 33, official combined fuel economy of 72.4 mpg and CO2 emissions of only 89 g/km - a 14% improvement over the highly successful current model, itself the winner of many awards since its UK launch in 2004.

Counter-intuitively, the new Toyota Prius uses a new four-cylinder, 1.8-litre petrol engine in place of the 1.5-litre unit in the current model to improve overall fuel economy, and offers additional driver control via three driving modes - in EV mode, the car can be driven as a pure electric vehicle for as long as the battery charge allows. For the first time, the new model incorporates plant based bio-plastics for its interior components and a solar roof that keeps the temperature inside the car at comfortable levels.

Miguel Fonseca, Managing Director of Toyota GB PLC said "It is a great honour to receive this award for the next Prius. Particularly as the judges recognise the car's low, whole life environmental impact. From materials procurement through production, to in use fuel saving and even end of life recyclability, Prius sets the benchmark for all other cars to match."