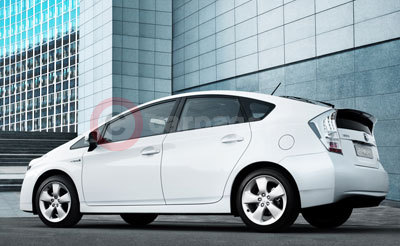 The new, third-generation Toyota Prius will not only be the world's most technically advanced mainstream car, it will also demonstrate the real world benefits of Toyota's market-leading hybrid powertrain, Hybrid Synergy Drive.

System power output has been increased by 22 per cent, from 109 to 134bhp (110 to 136 DIN hp) and, with performance to match a conventional 2.0-litre petrol vehicle, the new Toyota Prius will accelerate from nought to 62mph in 10.4 seconds.

At the same time overall fuel economy has been improved by 10 per cent, the new Toyota Prius returning 72.4mpg in combined cycle driving. The adoption of a larger, 1.8-litre engine reduces the rpm during high-speed driving to give a 10 per cent gain in long-haul cruising fuel efficiency. And with more torque produced at lower engine speeds, the new Toyota Prius offers more relaxed cruising performance, too.

The Toyota Prius easily exceeds the Euro 5 emissions standards, producing 89g/km of CO2. And when operating in EV mode at speeds up to 30mph, it uses no fuel and produces zero exhaust emissions.

Unlike parallel or 'mild' hybrids, which use additional electric motor power purely to boost petrol engine performance, or 'series' hybrids, which rely on electric power alone to drive the wheels, the new Toyota Prius is a full hybrid capable of running in petrol and electric modes alone, as well as a combination of both.

The new Toyota Prius has a 80bhp (60kW) electric motor that works in tandem with the petrol engine to improve acceleration, and which powers the driven wheels alone when the vehicle is operating in EV mode. Compared to the motor used in the current Toyota Prius, it is 20 per cent more powerful, yet 33 per cent smaller.

During deceleration and under braking, the electric motor acts as a high-output generator to produce regenerative braking. This optimises energy management in the Hybrid Synergy Drive system by recovering kinetic energy that would normally be lost as heat as electrical energy for storage in the high-performance battery.

From start-up and at speeds of less than 31mph (50km/h), the new Toyota Prius automatically operates in EV mode. The driver can also select EV mode manually, with the car's driving range determined by the level of battery charge.

In ECO mode, throttle response to aggressive accelerator pedal inputs is reduced and the air conditioning control is adjusted for improved fuel economy. Depending on driving conditions, ECO mode can help drivers achieve a 10 to 15 per cent reduction in fuel consumption.