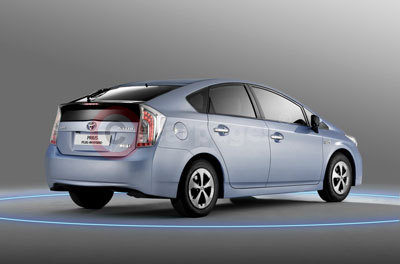 A plug-in hybrid is as it sounds – you plug it into the mains to full re-charge the battery, some hybrids purely work by re-charging their own batteries whilst on the move from clever re-generation systems and from the petrol/diesel engine.

It only takes 90 minutes to full re-charge the Toyota Prius Plug-In Hybrid from a domestic mains outlet.

The Toyota Prius Plug-In Hybrid has a range of around 15.5 miles purely under battery power as an Electric Vehicle (EV). Which compares favourably with the Volkswagen Touareg Hybrid that we just tested where we could only go couple of miles on battery alone (which is an unfair comparison much heavier and a completely difference beast).

We very much like the idea of doing the school run or local shopping purely as an EV – the only danger is how quiet the car is - some pedestrians do not hear you.

When used in conjunction with the petrol engine (in Hybrid mode) – this gives an effective combined cycle emissions of 49 g/km and fuel economy of 134.5mpg

When the EV battery is depleted, the Prius Plug-In Hybrid automatically switches into HV mode, delivering CO2 emissions of 85 g/km and economy of 76.4mpg, an improvement on the emissions and fuel economy of the standard Prius.

The gives an effective 769 mile range for the Toyota Prius Plug-In Hybrid.