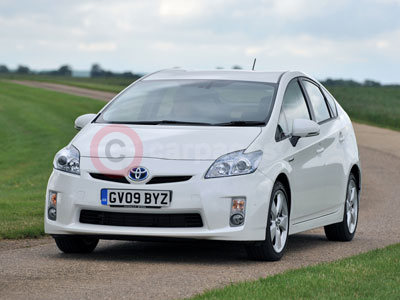 The low emissions and fuel efficiency delivered by the new Toyota Prius in everyday driving would be of little value if they were not backed up by equally environmentally focused manufacturing. As part of Toyota's commitment to achieving the best possible performance throughout the car's lifecycle, the production centre for the third generation Toyota Prius is a standard-bearer for clean operations and the use of renewable energy sources.

The Tsutsumi plant in Japan is one of five Toyota global Eco-Factories (Burnaston in the UK is another) that are designed to minimise environmental impact and develop best practices for adoption elsewhere. It has held the ISO14001 'green standard' for environmental management since 1996, pioneering innovations in energy saving, waste management and recycling.

Just as the new Toyota Prius can use solar energy to keep its cabin cool when parked, Tsutsumi meets half its electricity requirements with a 50,000m2 array of solar panels that can generate 2,000kW of energy an hour. The rest of its energy demands are met by an efficient gas co-generation system.

To ensure only as much power as needed is used, energy-saving lighting has been installed and patrols are carried out to monitor usage. A control system cuts electricity use when the plant is non-operational and the building of sunlight ducts allows more natural light to be introduced into working areas.

Even the building itself helps clean up the local environment, with 22,000m2 of the assembly plant being covered in photocatalytic paint. This reacts to sunlight by releasing active oxygen into the atmosphere, which helps break down harmful substances such as nitrogen oxides (NOx). To help offset CO2 emissions, Tsutsumi workers and people from the local community joined forces to plant 50,000 trees around the factory site in 2008.

Tsutsumi sends no waste to landfill and cut the amount that is incinerated by 82 per cent to 730 tonnes between 1999 and 2006, with the future goal of reducing that figure to zero.

Between 2003 and 2007 CO2 emissions from the plant were reduced by 36 per cent. During the same period, the total amount of waste produced was reduced by 21 per cent between; use of volatile organic compounds (VOCs) was down by 48 per cent; and 14 per cent less water was used.

Tsutsumi operates a comprehensive water recycling system that has cut the amount discharged into local rivers by half, while the water that is released is actually cleaner than that in the waterways themselves.

As an Eco-Factory, Tsutsumi is also committed to working in harmony with its local community and surrounding environment, and to an operational lifespan of 100 years.