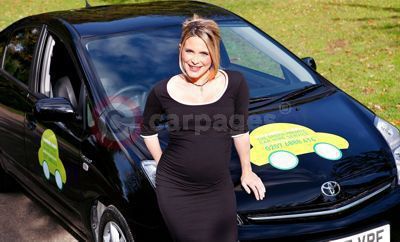 TV personality Lisa Rogers reckons that the new private car service Carmic Cars offers the cleanest, greenest way of getting round London in 2007 by using only low-emission Toyota Prius Cars. With her second baby on the way, the Scrapheap Challenge presenter has applauded the idea of taxis that are not merely carbon-neutral but “carbon-negative”.

Carmic Cars, based at the Business Design Centre in Islington, has been making waves since its private-hire operations began in the capital this summer. Uniquely, the company offsets more than twice the carbon emissions its operations generate.

By using the Toyota Prius cars, and participating in an offset scheme to supply low-energy light-bulbs to Asian villages, Carmic Cars has raised the bar for all those outfits that promise merely to neutralise their environmental impact.

The busier the streets, the lower the CO2 emissions and fuel consumption of its fleet of 12 top-of-the-range Toyota Prius hybrids, as the cars’ electric motors silently substitute for petrol power.

“It’s really important that everybody does what they can to prevent global warming,” says Lisa. “Carmic Cars is no more expensive than any other car company, so it’s simply about making a green choice.”

Former Big Breakfast star Lisa Rogers has gone on to present other Channel 4 programmes including Scrapheap Challenge as well as football shows for both ITV and BBC, but she also knows a thing or two about cars, having fronted Sky One's Vroom Vroom and Carlton’s Pulling Power motoring programmes.

She has converted her own car to run on pure vegetable oil. “I’ve been a member of Greenpeace for years, but possibly didn’t live as green a lifestyle as I should have done,” she says. “Having had my first child, and now expecting another one, I’ve started to think about what sort of planet I’ll be leaving them to live on.”

Lisa is one of many media folk to welcome the arrival of Carmic Cars. “Appropriately, one of our first jobs on launching was to take DJ Trevor Nelson to interview Al Gore in connection with the Live Earth events!” says the company’s joint head Mal Wharton. Recent passengers have included Derren Brown, Vic Reeves and talent from the Nickleodeon Kids Choice Awards.

Mal has a background in TV film production. Starting out on-screen in Johnny Vaughan’s Moviewatch on Channel 4, he became one of the show’s producers before moving on to MTV to work as a director.

“I got the idea for Carmic Cars when I went to New York to meet the group Gorillaz,” he says. “I was taken to the airport in a big people-carrier, which struck me as overkill for a little fella like me going away for one night. I thought there must be a better way of doing this.”

Mal persuaded his former boss Jez Breadin, then head of MTV News Europe, to join him as co-director and jump out of TV and into taxis. “Our good connections with major TV production companies and understanding of their needs are now paying off,” says Mal. “When it comes to the environment, media companies can often be more enlightened than other businesses.”

What Carmic Cars’ Toyota Prius lack in fumes, they boast in creature comforts such as Nintendo games consoles, iPod plug-ins and magazines to keep passengers happy whatever the traffic conditions.

“And there’s free bottled water, which of course comes in environmentally friendly compostable bottles, so there’s no nasty plastic left to pollute the place,” says Lisa Rogers. “It’s great, because you can be green and have fun at the same time!”