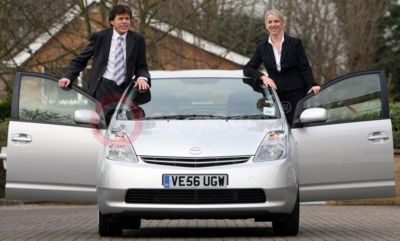 Saving up to 30% on running costs by switching an entire 45-strong sales car fleet to Toyota Prius - that’s the latest bright idea from the Premiere Polish Co Ltd. Trading as Premiere Products, the 84-year-old company prides itself on its all-round environmental responsibility. It manufactures and distributes chemicals and machines for commercial and industrial cleaning and maintenance, employing 225 staff at its 7-acre manufacturing, distribution and head office site in Cheltenham.

Until the start of February, Premiere Products had managed a user-chooser car fleet consisting of up to 15 models from eight different manufacturers, benchmarked according to leasing charges. Now the first three silver Toyota Prius petrol-electric cars have been delivered for use by its team of sales personnel, who operate nationwide and also into Europe. Eventually it is hoped that the entire fleet could be switched to hybrid vehicles. “We took the first step when we decided to make the fleet all-diesel about three years ago,” said Premiere Products Assistant Managing Director Andrew Marquand. “This time round we decided to specify an environmentally-friendly hybrid car, and because of its loadspace the Toyota Prius was the only one fit for our purpose.”

The cars, in both T3 and T4 form, are being supplied on full-maintenance contract hire over three years/80,000 miles by Masterlease, through local Business Centre Brooklyn Toyota of Cheltenham. “There’s been quite a lot of excitement among the drivers, because this is an innovative car and the whole driving experience is quite different,” said Mr Marquand the day after the first vehicles arrived. “They seem to have taken to the Prius like ducks to water.” Premiere Products expects the move to result in savings in running costs of as much as 30%. “The environmental benefits are apparent but this is primarily a cost-saving exercise,” said Andrew Marquand. “As a hybrid vehicle, the Prius is reported to be hugely economical in terms of fuel consumption.

“We’ll also make savings on Road Fund Licences, on congestion charging in London and any other cities where it’s imposed, and on taxation based on vehicle emissions for the company and for individual drivers. I also expect to see an enormous reduction in administration time by using one type of vehicle in one colour and just two models.”

And Mr Marquand paid tribute to Toyota Fleet for helping his team to familiarise itself with hybrid technology. “It was brilliant in allowing us to have a demonstrator first for a week and then for two months. That meant that my fellow-directors and a number of other members of the management and some of our sales staff had the chance to provide their input. “That’s something we have always tried to do, to ensure that we choose appropriate vehicles.”