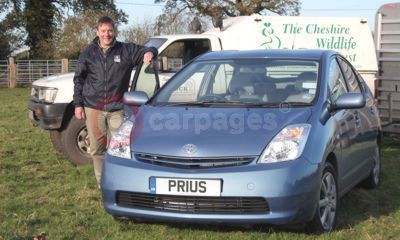 The head of one of Britain's regional Wildlife Trusts has swapped his conventional estate car for an environmentally friendly Toyota Prius hybrid vehicle - and he is hoping that his colleagues at the UK's other 46 Wildlife Trusts will also consider Toyota Hybrid Synergy Drive when it comes to replacing their own cars.

Chris Mahon is Chief Executive of the Cheshire Wildlife Trust which, after more than 40 years of safeguarding wildlife, is regarded as the region's leading environmental conservation organisation. Based in Nantwich, CWT owns or manages more than 470 hectares of nature reserves, including woodland, meadow, heathland, wetland and coastal dunes.

Chris's car was supplied by Oakmere Toyota of Northwich, and the approved Toyota Business Centre is now making Prius available to the Wildlife Trusts nationwide at special rates. Each regional Trust is an independent charity but all 47 work together on national and international issues. As the Wildlife Trusts, they collectively form the UK's leading conservation charity dedicated to all wildlife, with a membership of 560,000.

CWT already has a Toyota Hilux among its 4x4s to give its volunteers the off-road ability they need when working on often rugged wildlife reserves in all weather conditions. For on-road transport, being green is regarded as of prime importance, and the Wildlife Trust's Newark headquarters has circulated the terms of the Prius to the various branches. "With carbon emissions one of the biggest causes of global warming, the Trust is keen to show that transport can be both eco-friendly and cost-effective," says Cheshire Wildlife Trust. "The Prius uses the new petrol/electric hybrid powerplant which not only makes it more efficient, delivering over 60mpg, but also exceeds the standard for Super Ultra Low Emission Vehicles."

And new Prius driver Chris Mahon underlines CWT's stance: "The Prius has already been a commercial success and has helped lead other motor manufacturers towards the conclusion that green transport is both environmentally and commercially beneficial." Although Prius can compete on equal terms with conventional cars on performance, space and comfort, it returns 65.7mpg on the official combined cycle and its CO2 emissions are only 104g/km, making it one of the least damaging vehicles on the market.